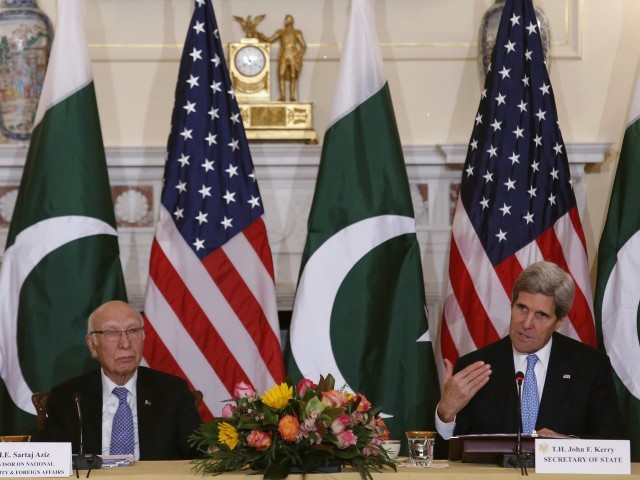 WASHINGTON: Pakistan is ready is ready to work for transforming bilateral ties with US into a true partnership, Adviser to Prime Minister on Foreign Affairs Sartaj Aziz and US Secretary of State John Kerry said at the beginning of the Strategic Dialogue on Monday.

Speaking at the opening of US-Pakistan Strategic Dialogue, Aziz said despite the heavy toll that we have suffered, Pakistan is ready to help in every way in supporting peace and stability in Afghanistan. However, Aziz added that in this it hopes that Pakistan’s security concerns are comprehensively addressed.

“We remain committed to facilitate a smooth and responsible US drawdown from Afghanistan and the continuing flow of the lines of communication.”

“The most important pre-requisite for strategic partnership, in my view, is mutual trust at all levels and among all key institutions. Once this trust is restored, then any unexpected incidents or accidents or disagreements over a policy or a tactic, would not be able to derail the relationship, as happened in 2011 and 2012,” said Aziz.

He further said, “there is a strong perception in Pakistan that while a lot of pressure is exerted on Pakistan on issues of concerns to India, our legitimate concerns are not conveyed to India with the same intensity”.

Pakistan is confident in the US as an ally, said Aziz.

Referring to the recently awarded GSP Plus status to Pakistan by European Union, Aziz said that we was hopeful that US would also provide Pakistan with preferential market access.

Earlier, speaking at the occasion Secretary of State John Kerry said building stronger ties with the people of Pakistan has long been his personal commitment.

“I have been pleased to work to elevate this relationship to a true partnership,” said Kerry.

“I want to commend the tough choices PM Sharif and his cabinet have made to reinvigorate Pakistan’s economy.”

The Secretary said that reinvigoration of US-Pakistan strategic dialogue is a symbol of strengthening ties across a broad spectrum of mutual interests.

“We appreciate the efforts of Pakistan govt to stand up against extremists and extremism, very few countries have suffered more at the hands of extremism than Pakistan,” said Kerry.

Ahead of the meeting, a US State Department official said in a background briefing that the dialogue covers five areas of cooperation and detailed discussions at the level of working groups on energy, defense, strategic stability, economic and finance, and law enforcement and counter-terrorism.

Leaders from both countries will work to “put together a blueprint of where we can take this relationship over the course of the next six months to a year.”

The State Department spokesperson emphasised that Washington-Islamabad cooperation spanned a wide range of issues and was not just confined to Afghanistan or the pullout of US and NATO forces from there.