Police believ­e the assaul­ts are part of a target killin­g spree in the city.
By Riaz Ahmad
Published: January 9, 2014
Tweet Email 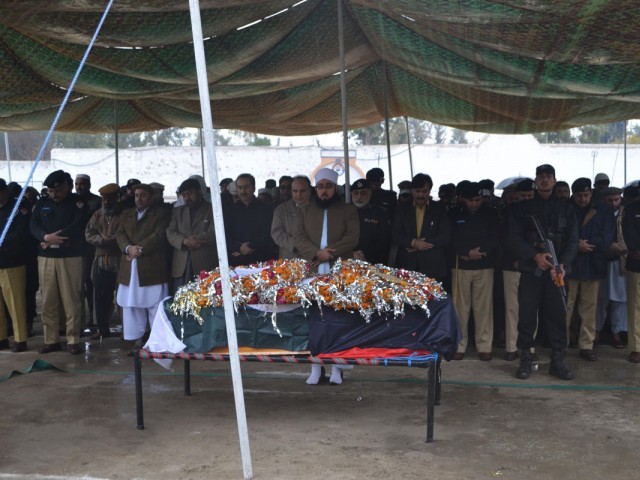 PESHAWAR: A head constable was shot dead while three other policemen, including Bhanamari SHO Haji Abdul Hameed, were injured in separate attacks on Wednesday.

Head constable Nisar Khan was killed while constable Naveed Khan was injured when two unidentified motorcyclists opened fire at them on Casualty Road, University Town. They were on duty at a checkpoint along the road when the gunmen shot at them. Nisar and Naveed were able to fire back despite their injuries, forcing the assailants to leave their motorcycle behind and flee on foot.

The injured policemen were taken to Khyber Teaching Hospital where Nisar succumbed to his injuries while Naveed was said to be in stable condition.

Police said there was no licence plate on the motorcycle and the attackers used 9mm pistols. A search operation was launched in Sufaid Dheri village after the incident but there was no sign of the culprits.

Earlier in the morning, SHO of Bhanamari police station, Haji Abdul Hameed, and his gunman, Siraj Nabi, were injured when two motorcyclists opened fire at their vehicle on Ring Road.

Hameed was on his way to the police station when the attack took place. Both men were shifted to Lady Reading Hospital where Hameed’s condition was said to be critical. Siraj Nabi had also sustained injuries, but doctors said he was out of danger.

Police suspect these attacks were a part of the target killing spree in the city in which a police constable identified as Manfarullah also lost his life on Monday. Manfarullah was shot dead outside City Hospital on Kohat Road. Police said that he was on duty when two men opened fire at him. They added the attackers had 9mm pistols and snatched the constable’s AK-47 before escaping.