Primary education: Girls school in Charsadda has no electricity or toilet

Primary education: Girls school in Charsadda has no electricity or toilet 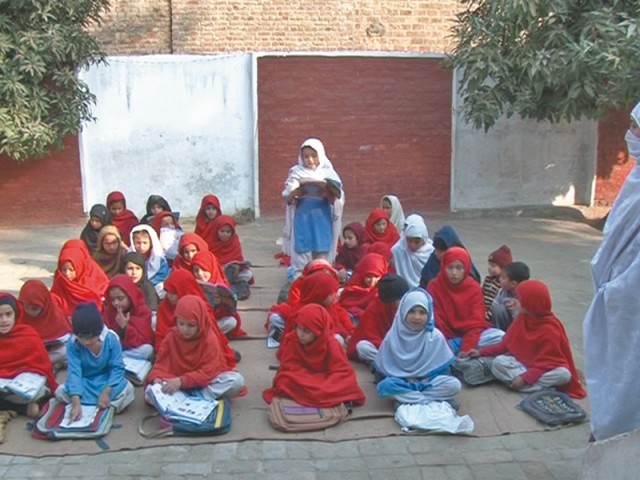 Three classes are held outside the main building of the school. PHOTOS: NOORUL WAHAB

Despite the Pakistan Tehreek-e-Insaf’s (PTI) much-appreciated education policy, there are some things the Khyber-Pakhtunkhwa (K-P) government has overlooked. For example, a girls primary school in Malikabad, Charsadda does not have basic facilities such as electricity or a toilet.

Nagina, a teacher at Government Girls Primary School, Malikabad, Charsadda, said the school was established in 1989 and holds classes from nursery to fifth grade. She claims the school does not have any electricity and this causes difficulties for the students. The teacher also alleged the contractor used substandard material while constructing the building because of which they were suffering.

The boundary wall of the school has cracks and the doors are in a shambles. PHOTOS: NOORUL WAHAB

The boundary wall of the school has cracks and the doors are in a shambles. Three classes are held outside the main building as there is shortage of space. Nagina added that they did not even have toilet facilities at the school.

“We have taken all these issues to the senior officials of the education department, but to no avail,” she said. “We have requested the officials to announce holidays as the children cannot take their classes in extreme cold.” She added that they were struggling to perform their duties.

District Education Officer Rabia Anis told The Express Tribune she took charge two months ago and they were utilising all resources for implementing educational reforms by providing facilities to all schools according to the provincial government’s plans.

She said PC-I was ready to construct and upgrade schools across Charsadda and this primary school is one of them. She added the difficulties confronted by any school will be sorted out on a priority basis. Anis also warned that anyone found guilty of taking too long to resolve the school’s problems will be held accountable.