Karachi 2013: The deadliest year of all

Karachi 2013: The deadliest year of all 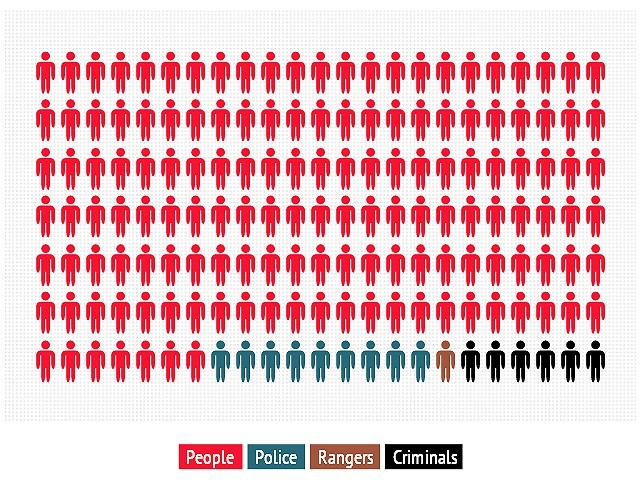 Visualised above - the ratio of civilian deaths, to those of police, Rangers and criminals in Karachi 2013.

KARACHI: Despite highly publicised and much touted operations by law enforcement agencies (LEAs), 2013 has gone down in history as the bloodiest year so far for Karachi with 2,700 people killed and crime soaring  past 40,000 reported incidents.

Data released by the Sindh Police and Rangers shows that even though LEAs were seen to be in constant action, crime soared to 40,848 incidents of reported crime, even as thousands of criminals were arrested, raising questions about the gains claimed by the government.

With the Karachi police unable to effectively take on criminals across the metropolis, Rangers were given police powers and tasked to spearhead crackdowns against criminals.

Despite such extensive action, 2013 saw incidents of heinous crimes such as killings, extortion, kidnappings, robberies, theft, terrorism, remain at all time highs, similar to trends seen in 2012.

While 181 target killers were arrested (69 by police, 112 by Rangers), the data provided shows that 2,715 people were killed in the year.

The word ‘cracker’, a term for a tennis ball filled with explosives to make a crude improvised explosive device, became a household name in 2013, while bomb blasts now regularly mark turn of events. Yet law enforcement agencies reported the arrest of just 33 terrorists (19 by police, 14 by Rangers) in the year.

In the days before the year ended, a minor was killed when a grenade was hurled into a house in PECHS locality of Karachi. Though police suspected that the incident was related to extortion, the owner of the house was reluctant to divulge that.

Police also suspected that a blast in the car of a travel agency owner was caused by explosives planted by extortionists. With estimates that only a third of extortion cases are reported, these and many other cases did not make it into police’s list of 519 reported cases of extortion in the year.

The fact that these incidents took place towards the end of a year in which law enforcement agencies claimed to have arrested 253 extortionists (101 by police, 152 by Rangers), shows that the fight is nowhere close to being won.

With 3,086 robberies in the year, including 28 bank robberies, and 10,501 reported mobile snatching, police and Rangers could arrest only 321 robbers and 149 street criminals.

The largest group of criminals arrested by law enforcement agencies was of absconders in various court cases — 3,356.

The second largest group of people arrested were those booked under laws for carrying guns (2,454) while 2,841 small arms were also recovered.

A total of 1,441 people were booked under anti-narcotics laws, forming the third largest group of people arrested for heinous crime.

In all, success in capturing the most deadly criminals was low.

With over 2,000 people killed by September in the city, it was no secret that a crisis was brewing in the country’s financial hub.

Perturbed, newly elected Prime Minister Nawaz Sharif flew in to kick start remedial action. Taking all parties into confidence, and deciding on keeping the army in the barracks, a fresh assault on crime was announced in early September.

Though the bloodletting did not stop, police data claimed there were only half as many killings in September as compared to August.

Till the end of the year, the month-on-month graph of killings was in steady decline. Having peaked in March (318), the data claims that the daily average of killings for the second part of 2013 was almost half compared to the first part.

Other crimes were shown to be in decline too.

Kidnappings, dacoities, vehicular snatchings and theft, which peaked in July, were all shown to be down by almost half by the end of the year. However, in comparison to the hundreds of raids and thousands of arrests, the gains looked less impressive.

Extortions, which peaked in September with 77 reported cases (after, jump in reporting them) was steady at the year’s average number of 39 reported cases in December.

The year was the deadliest for law enforcement personnel as well. As many as 172 policemen were killed in the city, along with 19 comrades from the Rangers. In the same period, police and Rangers reported killing 105 criminals in 2013.

The Rangers were the more ruthless of the two LEAs, reporting as many as 48 criminals killed in 28 encounters.

Full Sindh Police crime data for Karachi in 2013 can be viewed here.