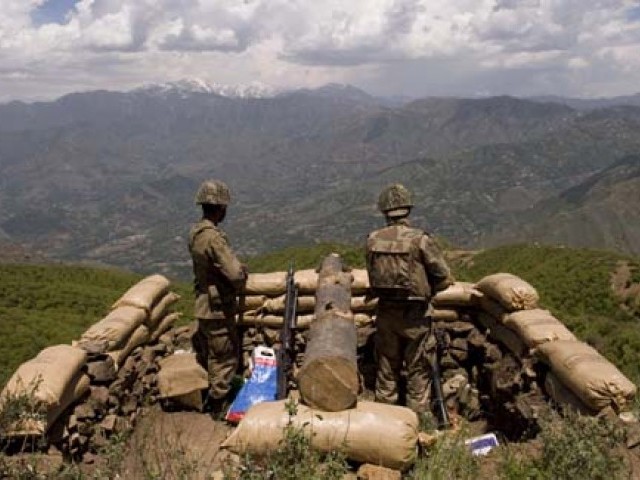 Raids were conducted a day after a suicide attack killed at least 5 soldiers, wounded 34 others in the area. PHOTO: AFP

MIRANSHAH: At least 33 suspected militants and three civilians were killed in raids and shelling by the armed forces in North Waziristan, officials said Thursday.

On Thursday in the afternoon, army units acting on intelligence reports of militants preparing another car bomb in a nearby hideout in Mir Ali, security forces launched a pre-emptive strike where 10 militants were killed.

In a statement from the Inter-services public relations, most of the militants killed were reportedly Uzbek.

The violence in the tribal district came a day after a suicide bombing at a military checkpoint killed five soldiers and wounded 34 others.

Clashes erupted after the insurgents attacked a convoy of security forces which was returning after rescuing soldiers wounded in Wednesday’s bombing, the official said on condition of anonymity.

The death toll could not be verified independently because of an ongoing search operation and curfew in the area.

“Security forces raided two hotels in the area close to the site of the suicide bombing and intense gunbattles left six suspected militants dead and 12 others wounded,” a local security official told AFP.

Separately, shells fired by security forces hit a house in Moski village and killed a woman and her two daughters, the local official said.

Military officials did not confirm the civilian deaths.

Get ready for long hours of load-shedding, says Ishaq Dar