Artist­s create a satiri­cal travel guide to Karach­i that shows you how to live like a local.
By Sanam Maher / Photo: Zaheer Kidwa
Published: December 22, 2013
Tweet Email 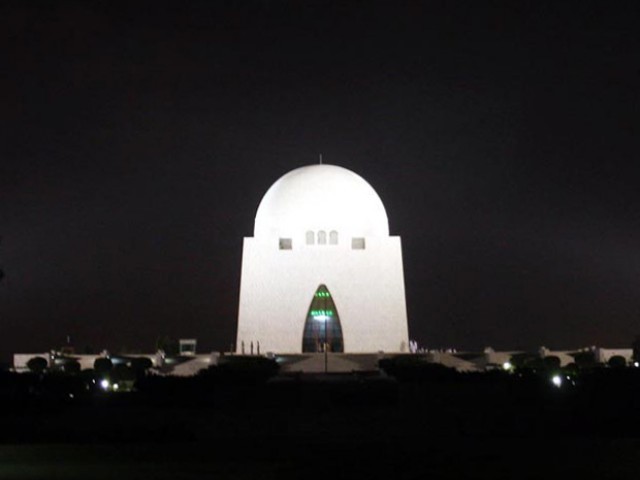 Artists create a satirical travel guide to Karachi that shows you how to live like a local. PHOTO: ONLINE

“I’m not sure what you’re talking about, but my father might,” said the ghora gaari waala to Sarah Khan, when she asked him if he knew Ahmed Rushdi’s Bunder Road se Kemari. The artist met the young man’s father, who immediately recognised the song and took her on a ride in his tonga along the route Rushdi sang about in 1954.

“I took that route every day,” Khan says, “as my house was located in the area and I would visit Khori Garden for my art supplies.” Her trip on the tonga, however, allowed her to glimpse familiar sites anew, as she furiously sketched while perched in the carriage. The sketches form part of Khan’s contribution to Right to the City: Travel guide to Karachi, a collaborative project by four artists, a historian and a curator determined to challenge local and international perceptions of Karachi as ‘Pakistan’s dark heart’ (as characterised by Time Magazine in 2012) or a ‘sweltering gangland’ (Time Magazine in October 2013).

For curator and editor, Shahana Rajani, the idea for the project took shape in December 2009, when a suicide bomber targeted an Ashura procession in the city, leaving more than 40 dead. More than 2,000 shops were gutted in arson attacks in Bolton market after the bombing. “I remember noticing the rhetoric used at the time,” Shahana explains, “that emphasised Karachi’s resilience, the ability to endure suffering without breaking in the face of violence.”

While a mixture of condemnation and calls for strength amassed on social media sites, the foreign minister at the time, Shah Mehmood Qureshi noted that “the people of Karachi have always shown utmost resilience in the face of crisis” Such talk of resilience, Shahana felt, “is not a positive thing as it allows us to just go on without having to deal with instances of trauma.”

Over the span of three months, she met with shopkeepers, traffic policemen, firemen and witnesses to the 2009 arson, recording their stories of how the market had permanently changed. “Most of them were so eager to talk about it,” she recalls, “they were really engaged and wanted to speak of how the market had changed, how the people who visit there have changed and how they now feel unsafe there.”

As Shahana recorded their stories, she created an archive of oral histories online, a narrative of recovery and the relationship between violence and spaces (accessible at http://livingkarachi.com). “The trope of resilience gets us to see this city as indestructible and unchanging,” she explains. “It is usually people who are privileged who speak of resilience. Life does go on in spaces like Bolton market, but it does so with great struggle.”

In her desire to question this narrative and perception of Karachi as an epicentre of violence, Shahana conceived a project that would enable her to flag up imaginative geographies of the city while providing a context to Karachi’s violence. “We often don’t give our city the credit it deserves,” she feels. “We’re apathetic and we think not much is being done to correct the ‘buray haalaat’, but that’s not true — there have always been people who have worked against the mainstream agenda and Karachi has such a rich history of activism and protest, of a struggle for change.”

Using the format of a travel guide, Right to the City utilises the genre of travel writing to question who is given the right to represent, and the sort of representation they produce. “The power to represent usually lies with the media, the film industry or the tourism industry,” Shahana explains, “and in a similar fashion, we wanted to generate images and perceptions of the city, reclaim representation and bring out our own narratives.”

The agenda was simple — to disrupt and contest mainstream narratives, while the format of a traveller’s guide allowed the artists and contributors to provide a cheeky commentary on the depiction of Pakistan as a space of inherent opposites. Take, for instance, the Commonwealth’s 2013 guide to Pakistan, which cautions travellers about armed carjacking, robbery, kidnap and murder alongside images of lush greenery and Kalash tribes. And so, even as Sara Khan takes you on a visual journey from MA Jinnah Road to Kemari, she mixes advice such as, “Don’t get dehydrated! Quench your thirst with a glass of freshly churned sugar cane juice” with “Caught without crime? Not to worry! Just slip Rs50 to the policeman and be on your way”.

“The two places visitors to Karachi usually want to see are the beach and the mausoleum of Mohammad Ali Jinnah,” writes artist Manizhe Ali in her chapter Twilight in Broad Daylight. For Ali, the Quaid’s mausoleum, located in the geographical heart of the city, is representative of the many faces of Karachi — flanked on one side of Numaish chorangi by two Imambargahs, the Shah-e-Khurasan and the Azakhana-e-Zehra, and on the other by the madrassa and masjid of the Khatm-e-Nabuwat group. In a space representative of a secular leader, the mazaar’s surrounding area becomes, according to Ali, “a hotbed of all the sectarian violence in the city and the route of the Shia Ashura juloos as well as the Youm-e-Omar juloos.” This is also the site where hundreds protested the sectarian violence against the Hazara community earlier this year.

“The road changes its nature depending on what is happening in the city,” Ali explains. “All you have to do is look at the mazaar and Numaish Chorangi to see what the city’s halaat are like.” A testament to the sectarian and religious diversity in Pakistan, Ali says the area is a space of conflict and one of increasing ghetto-isation, as former Hindu and Parsi residents move out of the area and are replaced by Shia families looking for safe spaces amongst others of their sect.

While Ali’s chapter focuses on the ways in which violence alters the nature of a space, the artists Bani Abidi and Seher Naveed comment on the response to violence. Abidi presents a veritable catalogue of the different kinds of security barriers found around enclaves in the city (from the hulking containers at the American consulate to the plant-filled concrete blocks outside the British High Commission) and Naveed maps out the sites of bomb blasts in order to plot out the coordinates of safe places in the city. The safest place in the city, it turns out, is the Arabian sea, Naveed wryly notes.

Similarly, historian Shayan Rajani plays with the format of the popular Texts from Last Night blog (a record of scandalous, drunken or inane text messages) and gives it the Karachi treatment, creating a witty comment on the ways in which we have become attuned to violence in the city. These are a collection of messages Rajani received from friends or family, such as “Bhai, parents want you home, there was a blast on Shahbaz” and “Dude! MQM guy shot… I think we’ll have to cancel our shisha plan again”. Rajani’s chapter, Sir Syed, we have an image problem again! hones in on the anxiety expressed by certain members of society who push for a ‘softer’ or positive representation of Karachi and Pakistan, particularly after 9/11.

Shahana has created a tour guide of the city to accompany the book’s launch, complete with readings from protest poetry from the 1950s as well as old photographs, historical accounts and anecdotes. The ‘Radical Tour of Karachi’, conducted via rickshaw and spanning the period between 1839 and 1970, hopes to tease out the city’s social histories. At the same time, the tour aims to encourage an engagement with the city’s past beyond a clucking disapproval of the deteriorating state of our beautiful old colonial buildings.

The book is available at The T2F Café for Rs300 and you can sign up for the Radical Karachi Tour via Facebook: https://www.facebook.com/radicalkarachi

Sanam Maher is a subeditor on The Express Tribune’s national desk. She tweets @SanamMKhi