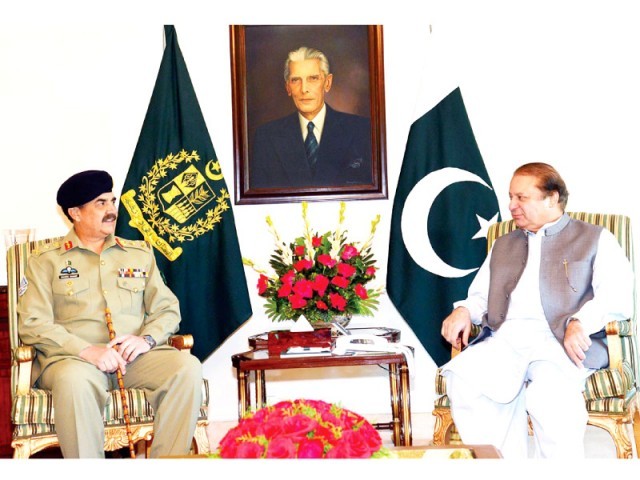 ISLAMABAD: Peace talks were declared as the top priority with regards to Tehreek-e-Taliban Pakistan (TTP) at the first ever meeting of the National Security Committee in Islamabad on Tuesday, Express News reported.

The meeting was chaired by Prime Minister Nawaz Sharif.

The discussions were focused on three key issues: formulation of National Security Strategy to safeguard the national interests; strategy on internal security and relations with Afghanistan.

The committee agreed that the economic development and prosperity of the people is dependent on ensuring security and approved a number of measures concerning enhancement of security on western border, development of FATA and other bordering areas to bring them at par with the national standards.

It directed the concerned ministries to take measures to facilitate regional peace and stability.

The leadership deliberated upon the government’s strategy to engage various groups of Taliban in order to curb extremism and militancy.

Consensus was also developed to have effective security along the international borders to stop illegal transportation.

It was also decided that Pakistan would cooperate with Afghanistan and help in the ongoing reconciliation process with Afghan Taliban.

DG Military Operations and DG ISI  briefed the committee on issues related to national security. The interior secretary also gave a briefing regarding the peace and security situation in the country.

The issue of drone attacks and relations with the United States were also discussed. A draft of the national security policy was also deliberated upon at the meeting.

Nawaz had earlier met the Army Chief one on one to discuss the security situation in the country.