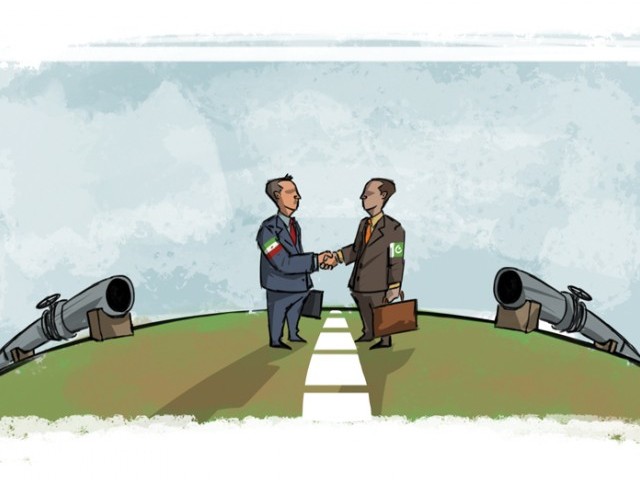 This will be first interaction between Pakistan and Iran on the IP pipeline since change of governments in the two countries in mid-2013. ILLUSTRATION: JAMAL KHURSHID

Pakistan and Iran are set to re-engage in negotiations over a much-delayed gas pipeline project in Tehran next week, where Islamabad is likely to press Tehran to waive penalty for delay, cut gas price and revise construction contract.

According to sources, Petroleum and Natural Resources Minister Shahid Khaqan Abbasi would lead a delegation in the upcoming talks, starting on December 9. This will be first interaction between Pakistan and Iran on the IP pipeline since change of governments in the two countries in mid-2013.

“The government wants to renegotiate the agreed gas price and the construction contract during the visit of petroleum minister to Iran,” a source said, adding that Pakistani officials were making the trip on an invitation from Tehran.

This comes despite US opposition and threat of sanctions against the project, which will bring gas from Iran to meet Pakistan’s pressing energy needs.

Though Iran has signed a nuclear deal with the US and other western powers, Washington has announced that it has not changed its stance on the IP pipeline.

In a bid to placate US concerns, Pakistan is mulling over seeking an undertaking from Iran that proceeds of the gas pipeline would not be spent on nuclear proliferation activities. Pakistani officials are also expected to take up this issue during upcoming talks.

A Pakistani delegation, led by the ministers of petroleum and water and power, visited Washington in the second week of November and asked US authorities to exempt the IP pipeline from sanctions. However, the US did not give any assurances.

Pakistan has placed a request before the Iranian government, asking it to dole out the entire financing, estimated at $2 billion, to lay its segment of the gas pipeline. Iran has committed $500 million and in response Pakistan has pledged to award the construction contract to Iranian firm Tadbir Energy.

The pipeline should be completed in December 2014, but officials believe it could take a longer time because of hurdles to generating financing in the wake of US pressure.

“Should Pakistan fail to honour its commitment, it would not only entail an initial financial liability of $3 million per day, Iran would also have the option to approach different courts of arbitration,” a Foreign Office official told The Express Tribune.

“In this situation, we are compelled to ask for waiving the penalty due to delay in implementation of the project,” he said. The government is expected to seek six-month to one-year time from Tehran.

According to a report prepared by the petroleum ministry, if furnace oil-based power generation is replaced with imported gas, it will lead to annual savings of $2.4 billion.

It also said the impact of IP gas price would be just 20% of the overall average gas basket price in the country if 750 million cubic feet of gas per day (mmcfd) is imported.

Under the project, Pakistan will initially import 750 mmcfd, which could be extended to one billion cubic feet. The Balochistan government wants 250 mmcfd for consumption at the Gwadar port, which would prompt the central government to seek increased gas supply to meet the needs of the province.