Punjab University: ‘Parents must keep kids away from IJT’

Punjab University: ‘Parents must keep kids away from IJT’

Though the handou­t did not mentio­n the IJT explic­itly, it was clear that the minist­er was referr­ing to that group.
By Our Correspondent
Published: December 3, 2013
Tweet Email 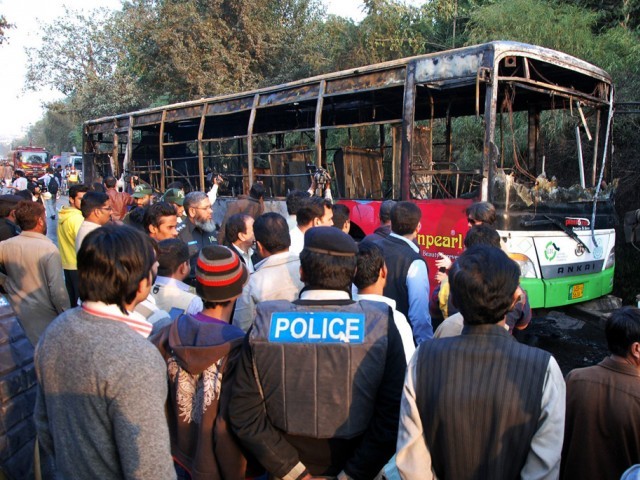 People gathered around the bus torched by the Islami Jamiat Talaba (IJT) activists on Monday in a protest at the Punjab University’s (PU) decision to convert a hostel for boys to one for girls. PHOTO: SHAHBAZ MALIK/EXPRESS

Education Minister Rana Mashhood Khan has appealed to the parents of Islami Jamiat Talaba (IJT) activists not to allow their children “to become tools of elements putting their future at risk for vested interests”, according to a handout.

The minister spoke to media at the Punjab University on Monday after clashes between police and students over the evacuation of a hostel. He said that the protesters were hooligans disrupting classes, blocking general traffic and terrorising public transport.

He said that the protesters had also demanded the release of some people arrested for physically assaulting two teachers, threatening to kill them and firing in the air. “Armed elements” instigating students to protest for their release had links to the Taliban and had taken illegal refuge in various hostels, he said. Khan noted that student unions were banned in Pakistan.

Though the handout did not mention the IJT explicitly, it was clear that the minister was referring to that group.

The IJT said that its protest was focused on the lack of accommodation on campus. “We had gathered to hold a protest against the lack of hostel facilities. The PU admin called the police and they arrested many students. Our stance is that new hostels should be constructed, but the university administration got Hostel 16 vacated and shifted girls there. This is just a temporary arrangement and an eye-wash,” said an IJT spokesman.

He accused the university of planting empty liquor bottles, drugs and ammunition in IJT Nazim Rao Adnan’s room in the hostel to discredit the organisation. “The vice chancellor could find rocket-launchers from there if he wanted to. All he has to do is ask somebody to place them there and then show them to the police and accuse the IJT of bringing them there,” he said.

Speaking at a press conference, PU Hall Council Chairman Prof Muhammad Akhter said that the discovery of bottles of alcohol and bhang in the IJT nazim’s room was a minor matter when compared to the arrest of a terrorist from his room. He was referring to the arrest of a suspected Al Qaeda handler from the PU campus in September.

He said that drugs, alcohol and “unethical material” had been found from IJT nazims’ rooms in the past. “This is the real face of the Jamiat. It puts religious material on the shelves and hides liquor bottles and bhang under the clothes,” he said.

He said the raid on Adnan’s room had been witnessed by the media. Besides, Adnan had been living there illegally, he said.

Prof Akhter rejected the IJT claim that there was a shortage of rooms for boys, saying that last year, hostel capacity had exceeded allotments by almost 250 places. But there was a shortage of space for female students, he said, and that was why Hostel No 16 had been converted to a hostel for girls. All male students at Hostel 16 had been provided alternative accommodation prior to being removed. He said that the hostel would accommodate 200 female students. He said IJT activists had thrown stones at some students who had shifted into the hostel on Sunday.

He said that the IJT was on the one hand demanding more buses for students, and on the other setting fire to them.

Licence to exhibit: ‘Smuggled films not screened in cinemas’