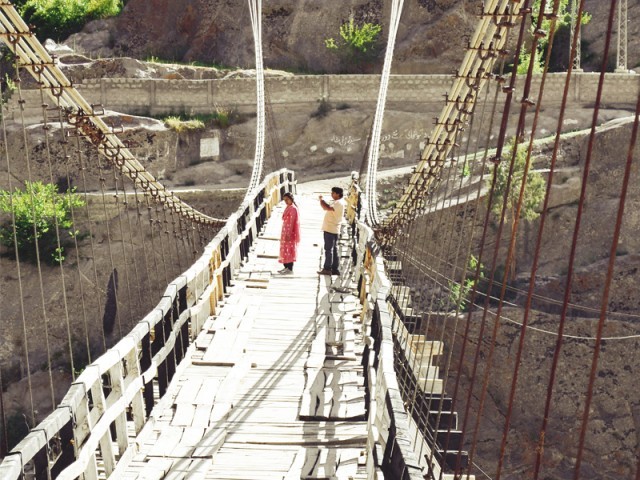 Basho forests are the pride of Baltistan, but my recent visit to the area stripped this myth and laid it bare. Just like the forests. What baffled me more was the apathy from those who thrive on these forests than the absence of the lush green landscape promised to me by my Balti friend, Tipu.

Almost as a forewarning, even the route to Basho is as dangerous as the looming threat to the ecosystem in the area. Nearly 40kms before approaching Skardu city, a sharp turn descends into a precarious-looking bridge that is suspended over the furiously flowing River Indus. If one is not skilled or courageous enough to maneuver the jeep over these wooden planks, I’d suggest they walk across it. The waterfall that welcomes you after this treacherous drive however is quite uplifting and following it is the final ascent up to the receding forests of Basho.

The landscape here is inundated with settlements. The rows and rows of houses in the village, commonly known as Khar Basho village, explain the cause for deforestation. The winding ride through the village ends at the mouth of the Basho forest valley and what it now holds comes as a major disappointment.

Only traces remain of this once thriving forest. I feel an overwhelming urge to leave but the weight of exhaustion and the expense of travelling holds us back. After spending Rs4,000 on a jeep ride, the decision to spend two nights at a community rest house seemed like the most practical thing to do. Our guide, Sher Muhammad, informed us that the income of this rest house is purportedly distributed equally among the villagers of Basho. But a little bit of inquiry reveals that the major chunk of the income was pocketed by a contractor, Yonus, leaving only a meager sum for each household that is distributed annually, by the end of the tourist season.

The services at the rest house were below par and the tea served here was perhaps the worst I’ve ever had. Day one was hence spent agonising over how to best spend the second day in the absence of the area’s biggest pull factor — the forest.

Next morning, however, things seemed a bit brighter. The sun shone over the mountain top, making it a perfect day for photography. I left the rest house with my equipment to head down to the river. In the absence of the forest, the mountains on all four sides satiated my appetite for photography. Although they are not as high or as impressive as the K2, they manage to strike a chord with everyone who visits the place. Basho suddenly got a lot more interesting as I grudgingly admitted to myself that beauty can take any shape.

It was also the first day out on the hills for the nomads. Women and children were dressed for this special occasion to see off their husbands and fathers as they wander through the mountains for months. Only a few stay back to tend to their families in case of an emergency as the nearest hospital is all the way in Skardu. According to a villager however, the village is very safe and the last time someone was shot here was nearly 10 years ago.

Everyday life in the village is uneventful explains our guide, Muhammad. Most of the village elders have been to Karachi. “Karachi is our mother,” they claim. But perturbed by the recent developments in the city they claim that Karachi is sadly no longer safe for them. “The best chefs in Karachi come from Basho village,” claims a villager proudly, adding that the chief chef at Spicy Roll is from Basho. Many villagers travel to the city to look for opportunities to earn and the new houses that continue to spring up across the village are directly linked to their stable earnings in the city.

As my visit here comes to an end, I prepare for my journey back home; carrying luggage to the jeep under a merciless sun, without any forest trees in the vicinity that could provide shade. Before we checked out however, I had a chance to speak to the chief forest officer and range officer who had just made their way up to the rest house for a routine meeting with the villagers to discuss local problems.

In the meeting, a local is granted a permit to use the forest wood to build a house. According to the Pakistan Forest Act of 1927, the forests in Balistan, including those in Basho have been absorbed as part of the government’s property with only ‘use’ rights extended to villagers. They must seek permission from the government for the use of forest products. Wanting to learn more about the destruction of forest land, I decided to confront the man. “Who cut all these trees?” I cut to the chase. The officer swiftly dismisses my query with, “which organisation do you belong to?” He then proceeds to give an unconvincing explanation, blaming the state of the forest on alpine conditions. But this does not explain the overnight appearance of tree stumps. My protest falls on deaf ears as the officer requests me to set up a meeting with him in Skardu regarding any further queries. His reluctance to address the issue was answer enough.

During the winter season, when temperatures in Basho drop to a reported -25 degrees centigrade and there are no forest officers to keep an eye, many villagers commit wood theft to light fires to keep warm. Although a ban was imposed on all commercial exploitation of forests throughout the Northern Areas in 1986, many instances of theft continue to be reported. During 1997, more than 90 loads (one load equaling 1,200kg) of wood were transported to Skardu without official permit, according to a case study by Jawad Ali from the Aga Khan Rural Support Programme, Baltistan. And according to our jeep’s driver (a former driver for the lumber mafia), every single villager in Basho has a part to play in this callous plunder.

Ameer Hamza is a former curator for Getty Images USA.
He tweets @ameerhamzaadhia