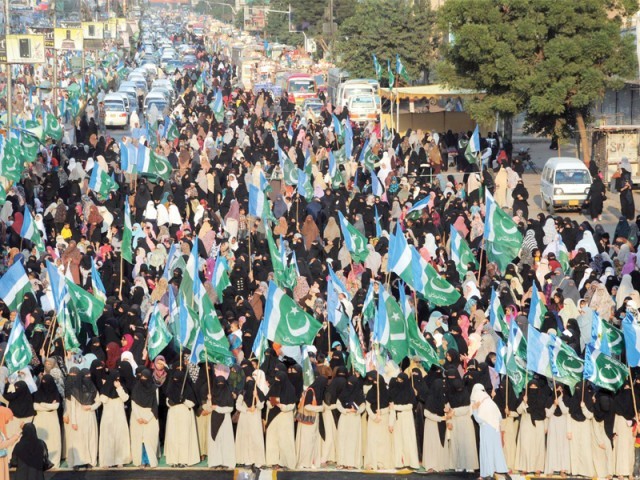 JI and PTI protesters at the rally on MA Jinnah Road on Sunday. PHOTO: MOHAMMAD SAQIB/EXPRESS

In what could be considered as an escalation in the protest against drone strikes and Nato supply routes through Pakistan, the Jamaat-e Islami (JI) organised a sizeable public gathering on Sunday in the city.

The protest came on the heels of the Pakistan Tehreek-e-Insaf’s (PTI) Peshawar rally on Saturday. Thousands of JI activists and supporters were joined by PTI supporters at Numaish Chowrangi, who then marched for around two kilometres towards Tibet Centre, where JI chief Syed Munawar Hasan and the provincial leadership of both the parties addressed the rally.

On the rally’s route, huge billboards, sponsored by the PTI, displayed shoulder-to-shoulder pictures of the chiefs of the two political parties.

Following the US drone strike that killed Hakimullah Mehsud on November 1 and sabotaged the fledgling peace initiative with militants in addition to the attack in a settled area of Hangu, both the parties had decided to demonstrate their strength against what they termed “infringement of Pakistan’s sovereignty by the US.”

The energetic gathering, preceded by a mobile stage improvised from a truck, chanted loud and unrestrained slogans against the US and the Pakistan government. A number of protesters held banners, placards and party flags while the participants on the front row held a large banner which read, ‘Drones and Nato supplies are a licence to kill Muslims.’

Hassan said the nation has taken to the streets against internal and external forces bent on destabilising the country.

Hassan specifically mentioned Prime Minister Nawaz Sharif and said that t is time for the Pakistan Muslim League-Nawaz (PML-N) to manifest its will. “They had been claiming that they were against the US interference but now when they are at the helm of power, we see no practical action from their side,” he said.

Hasan said that his party will provide full support to Khyber-Pakhtunkhwa government to stop Nato supply lines, as has been announced by the PTI chief Imran Khan. “It has been our principled stance since the beginning of the US attack on Afghanistan that Pakistan needs not to be allied with the occupying forces by providing them ground routes for logistic supplies.”

PTI’s lawmaker Arif Alvi, while citing the Amnesty International’s recent report, said the US must be held accountable for drone attacks in Pakistan as even independent and global human rights’ groups believe that unlawful killings through drone strikes in northwestern tribal areas could amount to war crimes.

Alvi said that over 40,000 countrymen have lost their lives since Pakistan got involved in the war on terror. “We have a reason to believe that the PML-N government is also obeying the unannounced accords with the US as its leadership that used to term drone strikes illegal now seems to have taken a u-turn,” added Alvi. “The behaviour of the PML-N’s ministers is lamentable who have made mockery of the protests against drone strikes and Nato supply lines.”

PTI supporters also staged a sit-in on Hyderabad Bypass near Hatri. The protesters blocked vehicular movement for over three hours on National Highway.

Led by provincial leader Aslam Rajput, protesters chanted slogans against the US drone strikes in Pakistan.

“We will close the roads and highways in Pakistan from where the Nato supply passes,” said Rajput.