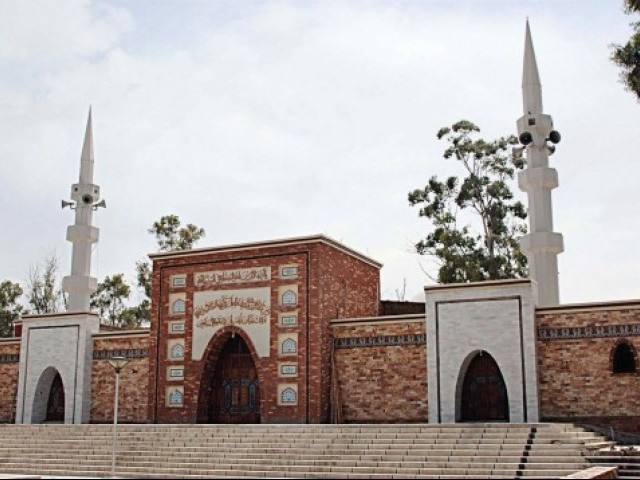 A file photo of the Lal Masjid. PHOTO: FILE

The victims of the 2007 Lal Masjid operation are all set to approach the Islamabad High Court (IHC) for cancellation of Pervez Musharraf’s bail, citing incomplete police investigation and fearing the possibility that the former president might leave the country.

“We will ask the court to reconsider the case and cancel Musharraf’s bail as it was granted on the basis of faulty police investigations,” said an official of the Shohada Foundation of Pakistan (SFP), the representative organisation for Lal Masjid victims, including Haroonur Rashid Ghazi, the brother of slain Lal Masjid cleric Abdur Rashid Ghazi.

Undeterred the elder Ghazi will file a petition for the cancellation of Musharraf’s bail and seek action against the five-member Joint Investigation Team (JIT) for ‘faulty investigations’ into the case.

According to sources, the petition would seek fresh investigation into the murder charges and request the court to order Musharraf’s detention till the results of the new investigation are made available.

The JIT had absolved Musharraf of any charges of murder in its final report by maintaining that no evidence was found to link the former president to the killing of deputy cleric and others in the Lal Masjid operation.

The court, in its detailed order, had said that all ‘evidence’ against Musharraf was based on speculation and second-hand accounts. The witnesses who testified against Musharraf were not present at the scene or did not witness the happenings that, according to them, occurred during the operation, it added.

Talking about allegations of faulty investigation, a senior police officer maintained that JIT investigations were based on reality and all procedures were followed during the probe. He added that the composition of the JIT was finalised after the consent of the complainant after changing at least three teams earlier.