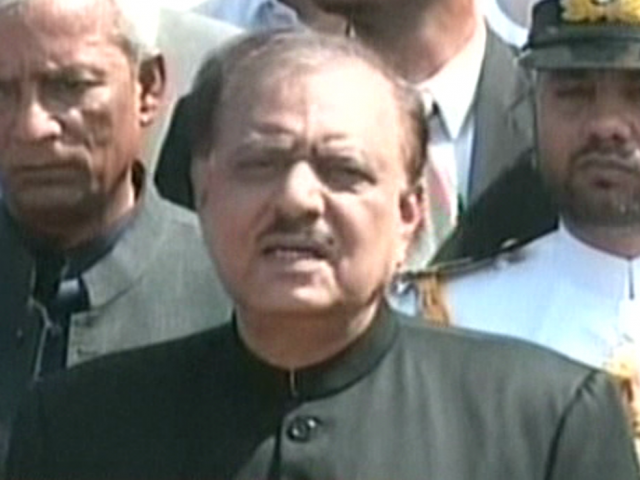 Screengrab of Mamnoon Hussain in his address to the press after his visit to Mazar-e-Quaid.

KARACHI: President Mamnoon Hussain said on Sunday he is hopeful that Pakistan will improve as the country “is in such a bad state that it cannot get any worse”.

Speaking to the media after visiting Mazar-e-Quaid, he said that “all (political) parties need to play a role” to enact positive change in the country, and identified an improvement in the law and order situation in Karachi as a prerequisite for economic development in Pakistan.

He added that the Pakistani people need to be patient as it will take time to control issues such as inflation and load shedding, stating that prices have increased due in large to the amount of money that was printed by the former government.

The president said that it will take between 3-3.5 years for electricity rates to go down, and projects to ensure lower rates were already underway.

Responding to a question regarding his origin from Sindh, President Hussain said, “I am from Karachi, Sindh, but my base is Pakistan,” stressing that a reason for the divide between Pakistani people is labels beyond Pakistani, such as Sindhi, which should be avoided.

Speaking about Prime Minister Nawaz Sharif’s visit to the United States, President Hussain said that Nawaz will speak to US Secretary of State John Kerry and US President Barack Obama about drone strikes and trade between the two countries.

“Drone strikes have proven to be a problem, not a solution, time and time again,” said the president, adding that Nawaz will once again address this issue during his visit.

He further said that improving trade between the US and Pakistan is also on Nawaz’s agenda, adding that both countries are currently on good terms.

The president said that he believed that the upcoming elections in India were the cause behind the increased violence across the Line of Control.

He said that “election gimmicks” by India’s opposition Bharatiya Janata Party (BJP) in an attempt to gain favour of voters had kept their government occupied.

He also expressed hope that the problem will resolve itself after the elections in India are over adding that a strict warning had already been issued to the neighbouring country warning of a “tit-for-tat” situation which would force Pakistan to respond with violence.

President Hussain concluded his speech saying “we (Pakistanis) should focus on the positive and stop saying negative things.”