The former ambass­ador to US starte­d her career in journa­lism, later joined the PPP .
By Our Correspondent
Published: October 12, 2013
Tweet Email 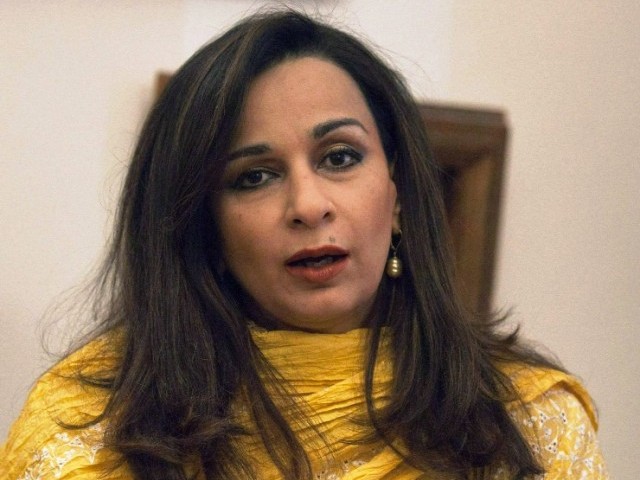 The former ambassador to US started her career in journalism, later joined the PPP. PHOTO: REUTERS

KARACHI: There is no shortage of stories when Sherry Rehman starts to speak as the 52-year-old has seen Pakistan evolve through the eyes of a journalist, politician and as a diplomat over the last 30 years.

“Journalism is my first love, albeit not a convenient one,” said the former ambassador to the United States. “As students, we were full of hope. I didn’t see myself as a doctor or a teacher. On the other hand I enjoyed writing which lead me on the path of journalism.”

Rehman was speaking at a talk organised by the Aga Khan University, titled ‘In the Service of My Country: The Politics of Living Dangerously’, on Thursday.

She recalled that she started her career in journalism in the mid 1980s when the country was run by a dictator and there was heavy censorship on the media. Rehman, who started off as reporter, was made editor of the Herald when she was only 26 while everyone around her was “older and grayer.”

“Journalism allowed us to see ourselves as agents of change,” Rehman said to the packed auditorium.  She mentioned a cover story of the magazine, Karachi’s Killing Fields, saying that it reinvented investigative journalism.

Today, however, Rehman sees a different kind of journalism. “They [media] do bring to light issues which would often go unreported, but people are less politically active and there are no agents of change,” she said, adding that news channels were racing for ratings instead of taking risks and opposing censorship.

Politics is everywhere, according to Rehman, as she fondly recalled her encounters as a journalist with Benazir Bhutto. “I was a powerful critic and Benazir would reach out to me.”

In 1998, after 10 years of being the Herald’s editor, Rehman bid farewell to journalism and embarked on a different journey to bring about change. “I met Benazir in London where she told me that I have to be part of the change.”

Rehman moved back to Karachi and decided to set up the Jinnah Institute where people could pursue research.

In 2002, she became a member of the National Assembly as part of the Pakistan People Party. She found her new career exciting. “Politics is about hope and transmitting hope.”

She was elected as an MNA again in 2008. “People ask me about my achievements as an information minister. It was not a long stint – during the first 100 days, I worked on the black laws of media.” Rehman also presented five bills pertaining to women rights.

Coming to the importance of democracy, she believed that the process should be uninterrupted. “Democracy allows everyone to have a voice. I know that the younger generation is cynical about democracy but they should realise that people have sacrificed their lives for it.”

Rehman briefly spoke about her role as a diplomat, saying that she did not choose the profession herself. “It was a red-eye job as I needed to be constantly alert.”

She kept her comments on peace in the region short, saying that Pakistan should not interfere in Afghanistan and let the country build its own future.

She was clear on her commitment to the PPP, saying that the party had her support and assistance. “Politics is like journalism; it gets into your blood.”

Correction: The earlier version of this story was running an incorrectly sourced picture of Sherry Rehman. The error is regretted.