Indian­s should consid­er themse­lves lucky India is huge, otherw­ise they may have gone same way as we did with Ayub.
By Kamran Shafi
Published: October 10, 2013
Tweet Email 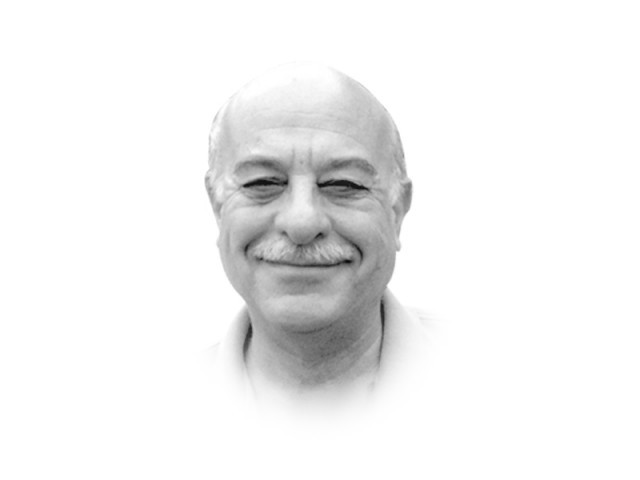 Which is another South Asian, let’s call it proclivity: we don’t stop when we get going. Whether it is ‘testing’ our various death-dealing missiles, which can deliver so many tonnes of nuclear weapons so many kilometres away (our respective drum-beating media vociferously touting the loud claims); or it is strutting on stages far too large, in shoes way too big for us; or, and indeed, it is people sticking their noses in business, which was never theirs.

Here, I refer to a recent piece in The News (“Indian general plays with fire” — October 9, ’13) by Praful Bidwai, a man I have known and admired since long, a man who has always stood up for what is right and fair. Indeed, he even attended meetings organised by the now-disgraced Ghulam Nabi Fai on Indian excesses in Kashmir and was duly pilloried in the Indian press for having done so.

Praful has written for dozens of publications over the years, including The Guardian and in his own career as a journalist, ended up as senior editor of the Times of India. He currently writes for Frontline, the magazine of the hugely respected daily The Hindu, based in Chennai; Reddif.com; The News, The Hindustan Times, and many foreign publications.

While saying that Indian generals had in the main stayed out of active politics (whilst, of course, influencing decision-making from behind the scenes), this is what he had to say about the infamous Indian unguided missile, the now-retired General VK Singh, whose unseemly tamashas we all witnessed during the closing months of his service as re: his age; allegations of some Lt Gen trying to bribe him into buying faulty trucks, etcetera:

“But recently-retired army Chief VK Singh’s shenanigans and other developments put a question mark over this assumption. Gen Singh, a newspaper has revealed, set up a secret intelligence unit called the Technical Services Division (TSD) to conduct a series of ‘unauthorised’ operations. These included funding politicians to destabilise the Omar Abdullah government in Jammu and Kashmir, paying an NGO to help change the line of succession in the army, espionage against Pakistan, and buying sophisticated telephone-call interception equipment to eavesdrop on fellow-officers.

“These allegations — based on defence ministry documents — are, to put it mildly, grave. They warrant serious disciplinary action. Singh hasn’t denied them. On the contrary, he says the army has always paid off politicians from all parties, and ‘all the ministers’ in Jammu & Kashmir to ‘stabilise’ the situation there and win the people’s ‘hearts and minds’.”

Now, while other retired chiefs of the Indian Army have denied that they too indulged in such activities, it is clear that the brash VK Singh has no qualms about what he did. Indeed, according to Bidwai, he has now teamed up with the BJP, for a possible boost in his own future political career. He also says that Indian army generals successfully scuttled at least three attempts by Indian (and Pakistani) diplomats to come to an agreement on Siachen in 1992; 2005; and 2011, leaving both armies to fight in the overwhelming odds that nature itself presents in that inhospitable area.

Bidwai goes on: “By failing to act against the delinquent officers, the government has allowed army personnel to usurp an illegitimate role for themselves — and get away. Some consequences of such irresponsible indulgence have become evident. The most recent is Narendra Modi’s September 15 Rewari (Haryana) rally, organised to mobilise ex-servicemen, and attended by 20 senior-rank former officers, including VK Singh, wearing ceremonial medals and ribbons.”

This is, by far, the most dangerous, summed up in these few words of Bidwai’s: “The danger of the Indian armed forces’ politicisation has reappeared, in a communal avatar. It must be resolutely put down.” Yes, the communal leaning of the Indian Army’s high command must be stopped in its tracks for it can be a danger to its neighbours and to the (‘secular’) country itself.

After reading this article, I tweeted to my ‘high-talking Indian friends’ that they should consider themselves lucky India was a huge country, otherwise they may well have gone the same way as we did with Ayub Khan first usurping power.

Hehehe, my high-talking Indian friends, not far behind are you: http://t.co/w66hANoz3C Thank your lucky stars you are a HUGE country!!!!!!!!

Back came a reply: “Bidwai can find no place in the Indian media.”

@KamranShafi46 – bidwai doesn't get any space in any Indian publication.

No wonder, I said, but it was India’s loss and no one else’s if sane voices like Praful Bidwai’s cannot be heard within India.

There is no way but peace for both the neighbours and we should consider ourselves lucky that in Nawaz Sharif, we have a strong leader who is resolute in the pursuance of this objective. Kudos to him for going ahead with the meeting with Indian PM Manmohan Singh despite the ‘hot’ LoC, where young hot-heads from either side, even on their own, can start a firefight or two. And despite the severe criticism aimed at him from his own country!

I have suggested before in these columns and will do so again: why don’t the Indian and Pakistani army chiefs have a hot-line between each other, too? If The Russian and US presidents could have one dating back to the 1960s, why can’t our two countries’ top generals have one? Incidentally, I was astonished to learn that the chiefs of the two nuclear-armed armies have NEVER met, EVER. Strange, no? Again overdoing it, sub-continental like.

Meanwhile, back at the farm, TTP supremo Hakeemulah Mehsud is quoted in this newspaper of record saying “As for explosions which cause damage to the life and property of Muslims, we have denied any link in the past, we deny any link today”. Two short reminders: March 8, 2010: 13 dead in Lahore: October 10, 2013: 17 Pakistani soldiers beheaded.

As to specifying damage to “the life and property of Muslims” has Mehsud already rewritten Articles 9; 23; and 24 of our Constitution? Even before the ‘jirga’? Going overboard again, no?