Eclectic exhibition: A delicate mix of the glamorous and the affordable

Eclectic exhibition: A delicate mix of the glamorous and the affordable 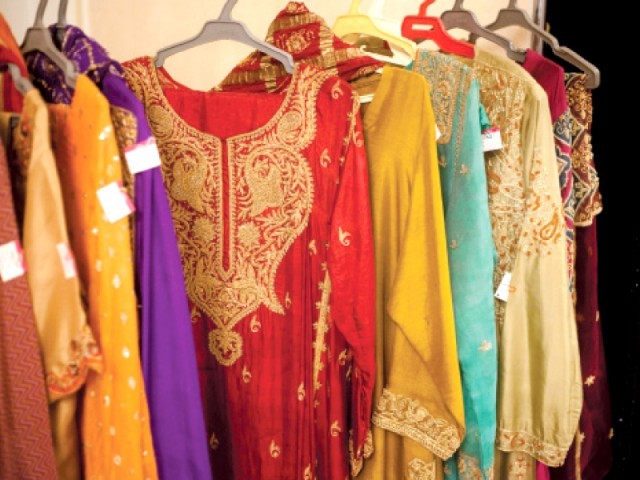 Women checking out dresses at the exhibition on Wednesday. PHOTO: MYRA IQBAL/EXPRESS

With Eidul Azha around the corner, the wedding season picking up and autumn in the air, there was never a better time for women to indulge in retail therapy. Entrepreneur and fashion designer Zehra Valliani exhibited her new line of clothing, jewellery and home accessories, at her studio, “Zehra V” on Wednesday.

In the clothing section, there is a plethora of formals and semi-formals to choose from. “I’ve played around with threads. I specialise in resham work. What really attracts me is embroidery which, added with sequins, becomes livelier,” said the designer. Even though there is gems have been worked into some pieces in the collection, the designer feels they are not always in fashion so they can become restrictive. “I design clothes that I would want to wear myself,” she added.

The fabric is mainly pure lawns, cottons, chiffons, silks, jamawars and raw silks with intricate embroidery, gems and gota. The designer, who works by appointment, takes on a diverse clientele rather than going commercial. “People come to me for fashion advice, I can tell them what suits them,” she said.

The designer wants to keep her creations within a reasonable price range and a majority of her dresses are unstitched. Most of the embroidered lawn and cotton suits go up to Rs7,000, the formals to Rs20,000 and wedding wear around Rs30,000 at the maximum.

“Trends and fashions change very quickly. Some of my clients want shalwars, others ask for tights and pallazos so I like to keep it flexible,” she said. Foreigners and working women mostly opt for stitched shirts that they can pair up with neutral pants.

Recently, she designed the wardrobe of Aseefa Bhutto Zardari. “I did the raw-silk jackets that she was wearing with printed suits,” said the designer. With a high-profile clientele of foreigners, diplomats and government officials, the designer feels going commercial is not for her.

The designer has also introduced a line of pendants in semi-precious stones with carvings of “Allah” on geometric-shaped stones. The pieces are chunky and wearable and are priced around Rs5,000 each.

“The pendants are traditional yet trendy. They are unique since you won’t find such designs anywhere else,” said Dr Naila Saadat, who bought one of the jewellery pieces at the exhibition, which is continuing till Thursday.