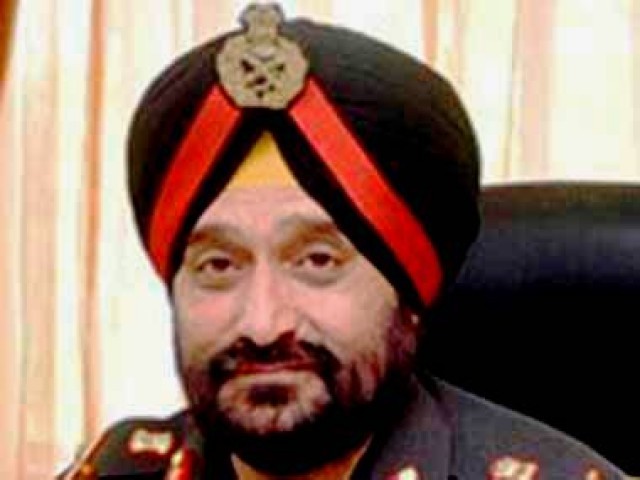 Repeating its old allegations, the Indian army on Tuesday once again pointed the finger at Pakistan for supporting the recent infiltration at the Line of Control (LoC) which kept Indian army engaged for two weeks.

“A letter retrieved from the body of a militant has revealed irrefutable evidence that he was a Pakistani,” alleged Indian Chief of the Army Staff Gen Bikram Singh on Tuesday at a press conference near Delhi.

Speaking at the 81st Raising Day of the Indian Air Force, the Indian COAS claimed that seven militants had been killed while infiltrating at Keran and might have been part of a 40-member group. He ruled out that the militants dominated or occupied any area.

Singh clarified that the infiltration attempt was not an ‘intrusion’ as the enemy was not occupying higher ground but sitting in a ‘nallah’ (rivulet).

“Which adversary is going to be in a dominating position when sitting in a nallah ?” he asked. “It was a desperate infiltration bid which has been foiled,” Gen Singh told reporters. The army chief said that seven of the terrorists involved in the Keran sector had apparently pulled out from there and tried to infiltrate from other areas but all of them were gunned down.

Responding to recent allegations by Indian army chief, Pakistan Foreign Office spokesperson Aizaz Ahmed Chaudhry rejected allegations, saying that the menace of terrorism could not be defeated by indulging in blame game.

“Pakistan remains committed to meaningful engagement with India to defeat terrorism which is our common enemy,” Aizaz said.

The Indian army in Srinagar called off a two-week operation to hunt down suspected militants in disputed Kashmir after a series of gun battles in which, Indian media reported, at least seven fighters were killed.

“I have given directions to call off concerted search operation,” Lieut Gen Sanjiv Chachra told reporters after a visit to the line that divides the Himalayan region between India and Pakistan.

The general also said that 59 heavy weapons had been recovered from the Keran area of Kashmir, along with a large amount of ammunition and rations.

He claimed that markings on the weapons indicated that the rebels had received help from the Pakistani army for the operation.