Coke Studio 6: Remixed and back with a bang

Coke Studio 6: Remixed and back with a bang 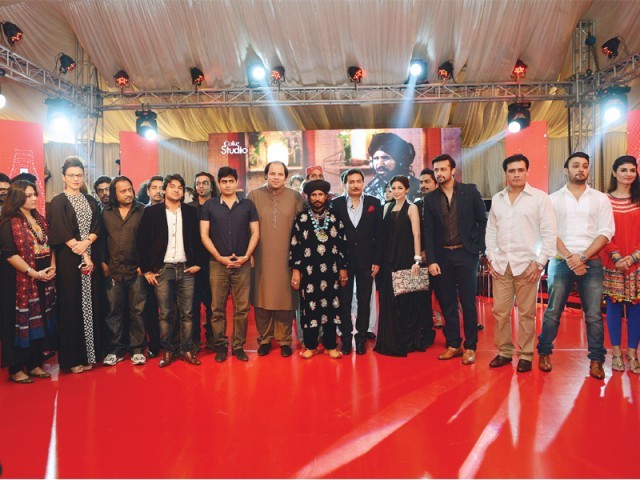 Fans have been anticipating the much-awaited Coke Studio season six for a while. Amidst whispers of ‘hurdles’ in the form of Ramazan delays and legal complications, the big launch finally took place in Lahore on Wednesday evening.

While the red and black Coca Cola-themed décor was elaborate, the event lacked the man of the moment — the real soul of Coke Studio, producer Rohail Hyatt. The man behind five successful years of Coke Studio in Pakistan was not there to bask in the show’s success. Some explained his absence by saying he is media shy while others said he is occupied with post-production work of the first episode. Whatever the reason is, the celebration was like a birthday party without the birthday boy.

Besides this significant absence, the launch was a star-studded event with most of the featuring artists and house band members present. The Express Tribune got hold of a few, who shared their experience and what should be expected from the upcoming season.

“Being stagnant is one thing that annoys me as a musician — you have to experiment with your art form,” said Atif Aslam. “This is the reason why I keep coming back to Coke Studio — it is one platform where you get a chance to reinvent yourself every time. Insha’Allah you’ll get to hear a different Atif altogether.”

For the first time since its inception, Coke Studio will be featuring foreign musicians, so change is definitely in order. “Foreign musicians are a great addition to our house band. I think they learnt from us as much as we learnt from them,” joked dholak player, Babar Ali Khanna. “Jokes apart, I must assure you that, this time around, the sound will be grander and more diverse,” he added.

Till now, Asad Ahmed has played all the electric guitars while Omran Shafique (Momo) has played most of the acoustic guitars on Coke Studio, with Hyatt also contributing in the acoustic section. But with foreign musicians stepping in, collaboration surely seems to be something to watch out for. “I personally feel that maybe we are limited by the type of musicians we have in Pakistan and that is why the sound this season will be a lot more global,” said Ahmed. “The new sound will offer a completely different take on whatever has happened previously on the show because [now] we have a super awesome set of foreign musicians merging their styles and tastes,” he added.

Jaffar Zaidi, who was replaced by Mubashir Admani (Mobi) last year, has made a comeback to the Coke Studio’s house band this season. “It’s always a great feeling to contribute to the most sought-after show in Pakistan,” said Zaid. “The format is very different. In fact, [it is] more like studio recording but my contribution to the studio hasn’t really changed from what it was before,” he shared.

Apart from some the famous mainstream musicians, known banjo player Mumtaz Ali Sabzal from Lyari, has also been taken on board this season. He is excited about the project. “It is high time that the sounds and rhythms of Balochistan, a province that’s bleeding, are heard on a global platform,” said Sabzal. “Through my Banjo and the sounds of other instrumentalists from Gawadar and Naal, we have tried our best to bring across the sweetness and humbleness of Balochi culture across.”

Kamran ‘Mannu’ Zafar, the bassist for Coke Studio from season one, also seemed happy with alterations in the show’s signature sounds. “More than the fact that we have foreign musicians contributing, it is the choice of foreign instruments that has changed everything,” asserted Mannu. “There has been a conscious effort to find out instruments that have had an impact, or still are a part of our extended culture, which feels and sounds great.”

With a great line-up, high expectations and some interesting changes, the much-awaited Coke Studio season six will air on October 13.