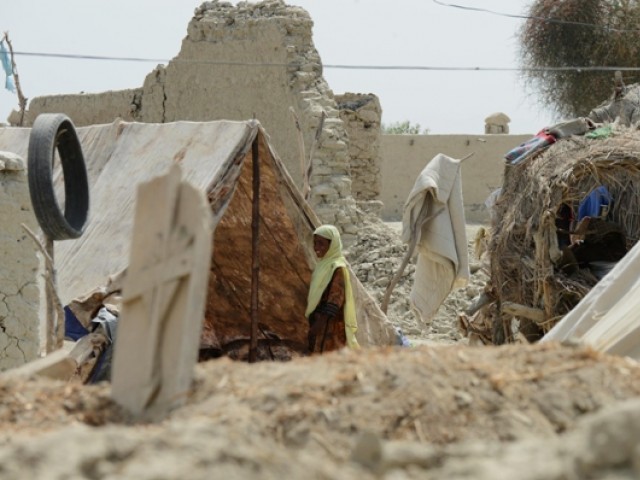 A Pakistani earthquake survivor stands in front of her makeshift camp in the devastated district of Awaran on September 25, 2013. PHOTO: AFP/FILE

KARACHI / AWARAN: Hawa Bibi, a survivor of the earthquake in Awaran, was brought to the Civil Hospital Karachi (CHK) with critical injuries on Sunday morning. But the treatment was too late as by afternoon, the 70-year-old woman succumbed to her injuries.

“She could have survived if she had been treated on time,” said a senior doctor at the hospital. According to the CHK Medical Superintendent Prof M Saeed Quraishy, she had a brain injury. Hawa Bibi was among the 25 earthquake survivors brought to the CHK.

Prof. Quraishy said that all the patients were being given maximum medical assistance, adding that most of the patients had fractures while some had multiple injuries.

Around 35 patients have been admitted at the Jinnah Post Graduate Medical Centre, but none of them life-threatening injuries, said Dr Seemin Jamali, the joint executive director and in-charge at the JPMC. “Two patients, including a female, have spinal cord injuries while others have multiple fractures. The hospital’s management is not only providing the best medical care to the patients but also looking after their attendants,” she said.

No aid in sight

It takes almost eight hours to reach Karachi from disaster-struck Awaran, especially when coming from its Northern and Western sides. Even though it’s the district headquarter, medical facilities are scarce, if not nil.

“We don’t even have transportation to move the injured people to cities,” an elder of Gishkoor Town, Muhammad Iqbal, told The Express Tribune. “Not a single ambulance has come here. We shifted several patients to cities through motorcycles. Some of the patients were crying out in excruciating pain but their families had no choice but to wait. They were taken to hospital in cities after two days.”

According to Iqbal, the cost of going from Gishkoor to Awaran is almost Rs5,000. “The ambulance driver demanded money for fuel when a female survivor was being shifted. Since her family had no money, she was taken on a motorcycle with fractures in her legs.” When asked about the medical facility set up by the military in Awaran, the elder said that people could tolerate pain but not “attitude”.

While in the district, The Express Tribune team did not come across a single medical camp set up in the affected areas on the way from Awaran to Gishkoor. The villagers of Murad Bazaar (Malar) said that a medical team came for a few hours but left shortly after treating minor injuries, said a villager Asad.

Most of the inured people from the affected areas were first shifted to Awaran and then they were taken to Karachi through ambulances of different organisations, including Edhi Foundation. Because of the long route to Karachi and shortage of vehicles, four to five people were taken in one ambulance.

“My priority was to take them to hospitals as soon as possible,” said an ambulance driver, Abdullah. “It is a long way to Karachi requiring more fuel while the patients needed immediate relief, which is why I prefer taking more than one person in one trip.”