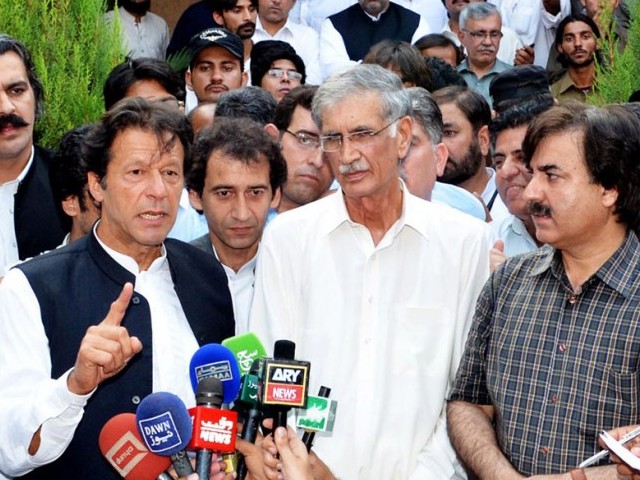 Pakistan Tehreek-e-Insaf (PTI) Chairman Imran Khan suggested on Wednesday the government allow the outlawed Tehreek-e-Taliban Pakistan (PTI) open an office in the country to pursue peace talks with the government.

The suggestion came a day after Interior Minister Chaudhry Nisar Ali Khan said that the government would review its decision of settling the militancy through dialogue.

Pressure started building up on the government after the deadly suicide bombings at a Peshawar church.

“The use of force is not a solution to this problem [of militancy]… this issue can only be resolved through peace talks,” Imran told reporters during a visit to the Lady Reading Hospital where he inquired after the health of those injured in the historic All Saints Church.

He urged the government to move ahead with the plan agreed upon at last month’s all parties’ conference for negotiating peace with the TTP.

“We have been fighting [the Taliban] for the past nine years.., Thousands of lives have been lost to terrorism.., There is a need to tackle this problem through negotiations,” the PTI chief said. “If the United States can allow the [Afghan] Taliban to open an office in Qatar for dialogue, then why can’t Pakistan do the same with regards to TTP.”

“Pakistan has two options – go to war against the militants or hold peace talks.”

Imran said the church attack should not be politicised. He accused the Awami National Party of using the tragedy for political ends and said that around 210 terrorist attacks had taken place in Khyber-Pakhtunkhwa under the ANP government.