Baba Ilyas’ busine­ss was placin­g advert­isemen­ts of films on horse carts and taking them around Lahore.
By Ali Usman
Published: October 10, 2010
Tweet Email 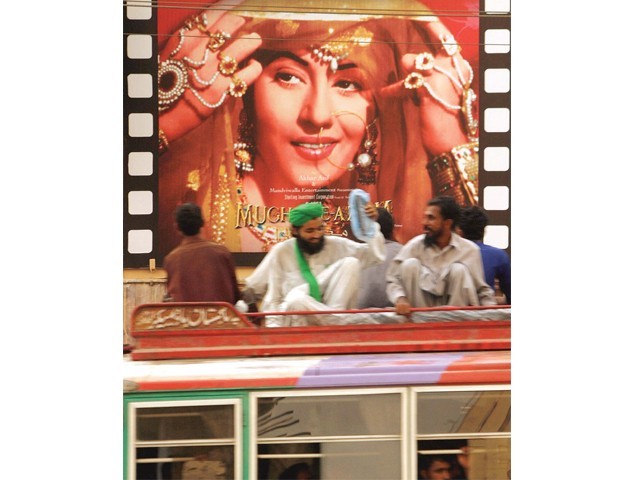 While films are now advertised using billboards and television commercials, the old-school ways of transport were once their domain. PHOTO: EPA

Ilyas’ business was placing advertisements of films on horse carts and taking them around Lahore.

While sitting at a food stall in Royal Park, which once used to be a film billboard painter’s workshop, Ilyas reminisces about the unique promotional tactics.

“I would place a big paper hoarding of a film at the rear side of the horse cart; hire a drummer and a man who would play a musical instrument. This practice attracted a lot of people and created hype about a certain film” he said.

Though the internet, cable television and other advertisement methods have stopped the practice of placing advertisements on horse carts, Ilyas still believes in the now defunct practice. “There was a certain kind of amusement attached to it. When you see advertisement of an upcoming film on television it might not attract you but when you watch people campaigning in person for a movie you just cannot ignore it,” Ilyas argues in a philosophical way.

“The horse cart itself has become an obsolete thing today. But our concept of advertisement which we used to attract people is still valid. However now they use digital prints and trucks or vehicles to advertise. We used horse carts while they use trucks these days. Time has changed but not our method,” he says.

Ilyas’s arguments might not be acceptable for many but it is yet another sign of Lahore’s cultural heritage fading away.

Dr AR Khalid, an expert in propaganda techniques, says that anything which attracts people is a good way to advertise.

“These advertisements can still garner attention as many of the young kids in cities might find it interesting and unique. Such advertisement techniques should not be wiped out altogether. “

Munir Mani, a former film billboard artist, believes that advertisements on horse carts were also environmentally friendly. “There was a charm in that. I loved that and miss it,” he says.

Zeb and Haniya: Scent of a woman