I feel like Lahore is turning into a desert: Samina Ahmed

I feel like Lahore is turning into a desert: Samina Ahmed

"Almost all the litera­ry and social moveme­nts starte­d from here but now I feel like Lahore is turnin­g into a desert."
By Ali Usman
Published: September 1, 2010
Tweet Email 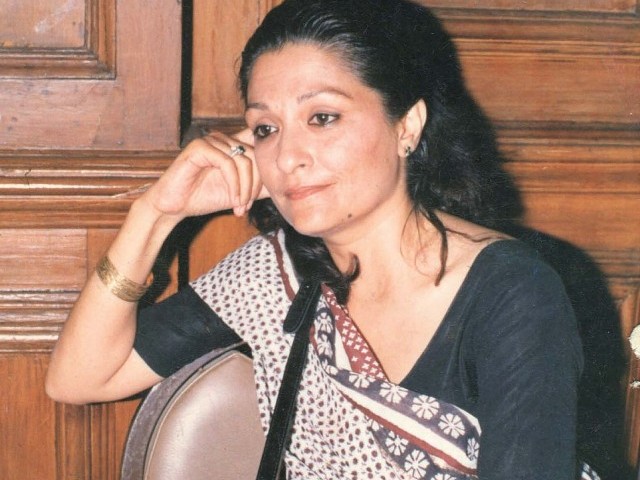 Samina Ahmed is being conferred with the Pride of Performance award for her services in television. PHOTO: FILE

LAHORE: Think about the history of Pakistani television productions, and Samina Ahmed’s name shines brighter than most. Along with working in hit productions such as “Family Front”, she has also continued to work in production. Ahmed is being given the prestigious Pride of Performance award for her services to television, which will be conferred upon her in a ceremony next March, which she says makes one feel more responsible about doing better work.

Samina Ahmed talked to The Express Tribune about the state of the arts in Pakistan.

How do you view Lahore’s cultural scene?

I think our history is being neglected. Almost all the literary and social movements started from this city but now I feel like this city is turning into a desert. We are completely ignoring our culture. The conditions are better in Karachi and Hyderabad when it comes to culture. We haven’t even archived our folk traditions and art in Punjab.

Lahore’s commercial theatre scene has been heavily criticised for its substandard dialogue and dances. How do you think it can be improved?

It is not the responsibility of one person to improve commercial theatre nor can you single out one person who is responsible for the deteriorating standard. It is the responsibility of art councils, people working in the industry and the government’s monitoring bodies. Commercial theatre is not a bad thing but it should have some standard. It was a mandate of arts councils to promote art and culture, but when they didn’t do this good artists and producers backed off. A vacuum was created and the commercial theatre filled it. The aim of arts councils isn’t to make money, and if they do so then they should build a parking plaza instead of spacious halls and auditoriums. Instead of renting out their halls, the art councils should promote art and culture.

There is the Punjab Arts Council, which is affiliated with councils in other areas in the province. It can organise an event with folk artistes and take them to Sindh and other provinces. This is what the arts councils in other provinces can do. By doing this the art councils will not only be promoting their indigenous art and culture but they would also be creating inter-provincial harmony. Music festivals, theatre festivals, puppet festivals and other types of events can be organised this way. There are talented people who want to show their skills – this is where the role of arts councils becomes very important.

Who should head cultural organisations?

Firstly, culture is not our priority. The officers who don’t get lucrative postings, then try and get appointed as the heads of different cultural bodies. It is like a feudal mindset that ‘we do not want to give funds and authority to artists’. Artists can run cultural institutions well. It is said that artists don’t work efficiently but government officials embezzle as well. You need to appoint such people to run cultural bodies who have relevant experience.

How can the cultural scene be improved?

There are many young artistes who need a platform. Earlier, we used to get artistes from schools and universities. We can do it now. We can give money to different groups in educational institutions and organise dramatic or music competitions. This will not only help reviving the cultural scene but would give us a pool of good artistes. It is a tragedy that an international event like the Rafi Peer Theatre Workshop’s World Performing Arts Festival has not been held for the last few years due to security concerns.

Why do you think Lollywood has declined?

Lollywood produced good movies in the past but we didn’t pay any attention towards film industry. General Ziaul Haq’s regime was a bad time for the film industry and art. In India they have the National Film Development Corporation which gives grants to new filmmakers but our government does not do anything like this. Hundreds of films are made every year in India, and then they can produce experimental movies like Ishqiya and can make movies like Tere Bin Laden. We don’t have logistics. We don’t have cinema houses. We don’t teach filmmaking. How can we then go ahead with films? We need to have courses on culture, filmmaking, drama and performing arts if we want to sustain our entertainment industry. Universities should demand that they want to start courses on playwriting, productions and acting and then we can do well in entertainment.