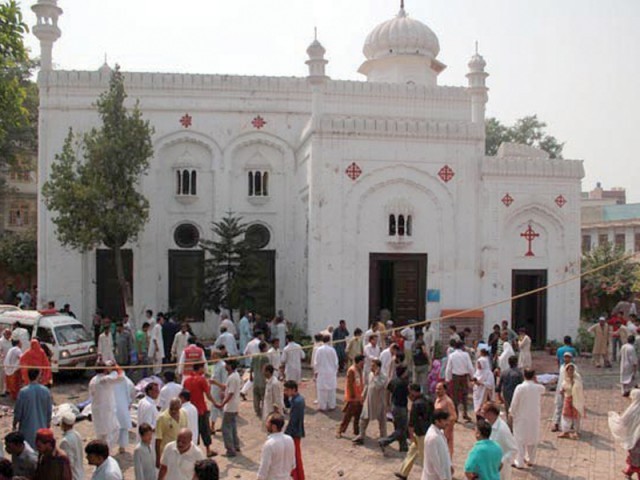 The SIC resolution said that while the government was making peace overtures, the Taliban continued their “terrorist activities”, most recently with the bombing of a Peshawar church. PHOTO: MUHAMMAD IQBAL/EXPRESS

The Sunni Ittehad Council has rejected the idea of holding peace talks with the Tehreek-i-Taliban Pakistan, saying that the offer of dialogue exposes the government’s weakness.

The Taliban should be dealt with by force, stated a resolution adopted by the SIC at its National Peace Convention at Aiwan-i-Iqbal on Sunday night. The SIC resolution said that while the government was making peace overtures, the Taliban continued their “terrorist activities”, most recently with the bombing of a Peshawar church.

The government had, without receiving any assurances from the Taliban, released several “terrorists”, it said. Talking to militants who had killed hundreds of Pakistanis was to rub salt in the wounds of the bereaved.

SIC Chairman Hamid Raza Rizvi said the organisation would continue to oppose talks with “rebels”. The SIC condemned all acts of terrorism and would continue to do so, he said. The government, by offering talks, had ignored the sacrifices of groups like the SIC, which had lost several leaders including Dr Sarfaraz Naeemi to Taliban attacks. While the Taliban were seeking guarantees before the dialogue in the form of prisoner releases, they were not even prepared to guarantee a ceasefire during the talks, he added.

Former senator Faisal Raza Abidi of the PPP said that it was time not to protect the political system or the government, but the whole country. He said those exploding bombs in churches and killing Pakistanis were not Muslims. He said the Taliban claimed to be the guardians of Islam, but at the same time stole liquor from Nato containers and sold it in the black market. He said the Taliban’s “acts of terrorism” were not reactions to drone attacks. If they were, the attacks would be targeted at Pakistan’s rulers, not the general public, he said.

He said the participants in the recent All Parties Conference which had called for talks with the Taiban were responsible for the terrorism in the country. By begging the Taliban for talks, the government had accepted the Taliban agenda. He said that he had no confidence in the courts, who had “freed 22,000 terrorists”. There should be military courts to try them, he added.

Dr Raghib Naeemi said that his father had been killed for issuing a fatwa against the Taliban. By attacking minorities, these enemies of the country were trying to spark conflict between followers of two religions in the country. He said that holding talks with the Taliban would strengthen them.

Majlis Wahdat-i-Muslimeen leader Nasir Sherazi said that terrorists were targeting everyone including Sunnis and Shias.

The attacks continued despite the government’s talks about peace. He said that Muslim leaders must speak out against acts of terrorism carried out in the name of jihad in Afghanistan and Kashmir.

Senator Jahangir Badr of the PPP also spoke at the convention, but did not bring up the proposed dialogue with the Taliban. He praised late SIC leader Sahibzada Fazle Karim. He said all sects of Islam should join hands to avoid clashes. He condemned the Peshawar blasts.