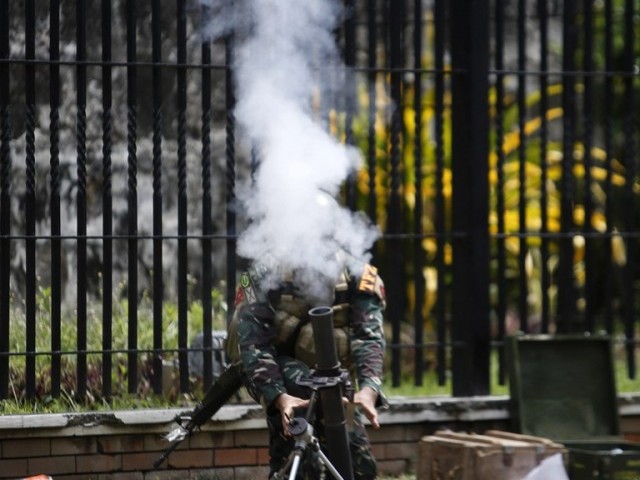 The head of a government soldier belonging to Task Force Zamboanga is engulfed with smoke as he fires a 60mm mortar round towards the Muslim rebels of Moro National Liberation Front positions in Zamboanga city in southern Philippines September 16, 2013. PHOTO: REUTERS

ZAMBOANGA: The Philippine military launched a helicopter assault Monday at Muslim rebels occupying parts of a major southern city, stepping up efforts to end an eight-day standoff that has left dozens dead.

The helicopter assault was the first air strikes since troops began their offensive on Friday to defeat the MNLF forces, who have been using civilians as human shields.

Asked about the potential for the civilians to be caught up in the helicopter assaults, Zagala emphasised they were “precision” strikes.

Zagala said earlier Monday up to 100 MNLF rebels were still engaged in ground battles with troops around the two coastal villages, a week after the guerrillas invaded Zamboanga to stake an independence claim.

Zagala said the rebels were defiant in the face of the military advance.

“They still have ammunition and they continue to fire at us,” he said, but insisted the military was very close to victory after taking some rebel positions at the weekend.

“We know for a fact that the end is near and they are trying to flee. Some of them may be trying to disguise as civilians, so it’s very critical that the village elders help us identify those who are not from their neighbourhoods.”

Heavily armed MNLF forces entered the port city’s coastal neighbourhoods on Monday last week in a bid to sabotage talks between a rival rebel group and the government that are aimed at ending decades of conflict.

Muslim rebels have been fighting since the 1970s for an independent or autonomous homeland in the south of the mainly Catholic Philippines. An estimated 150,000 people have died in the fighting.

The latest violence in Zamboanga has left 51 MNLF fighters, six security forces and four civilians dead, according to Zagala.

The rebels initially took dozens of hostages and burned hundreds of homes, forcing a shut down of Zamboanga, a city of about one million that is a key commercial hub in the region.

Zagala said MNLF rebels on Monday torched a section of Santa Barbara, one of the neighbourhoods they had occupied, to slow down the military advance.

Volleys of gunfire were heard ringing out across Santa Barbara before the helicopter assault, while sniper fire from the rebels prevented firemen from approaching the burning community, an AFP reporter said.

After its Philippine representative visited Zamboanga, the New York-based Human Rights Watch expressed concern for civilians trapped in the conflict.

As many as 300 civilians in one village had sought shelter in an ice plant building after abandoning their homes, while others had stayed behind to protect their belongings, it said.

Classes as well as ferry and air services remained suspended for an eighth consecutive day in Zamboanga, as local businessmen warned of severe consequences to the local economy.

Zamboanga, about 850 kilometres south of the capital Manila, is a former Spanish fort during colonial times famous for its thriving barter trade with neighbouring countries.

Today it is a major industrial and trading hub for the south, while one of its most important economic sectors is a sardine-producing industry.

The MNLF waged a 25-year guerrilla war for independence before signing a peace treaty in 1996 that granted limited self-rule to the south’s Muslim minority.

MNLF founder Nur Misuari deployed the gunmen to Zamboanga after accusing the government of sidelining his group during negotiations for a separate deal with a rival rebel group.

The siege began after Misuari’s men went to Zamboanga to plant an independence flag.