Author­ities invest­igate whethe­r it was an act of terror or an accide­nt.
By AFP
Published: September 16, 2013
Tweet Email 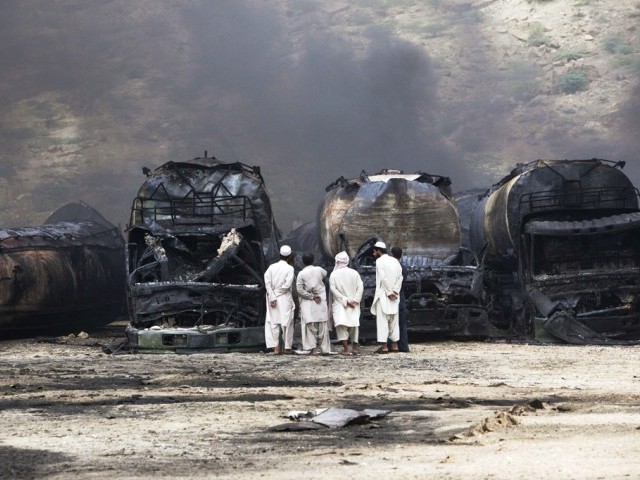 Men stand near damaged tankers of a NATO supply convoy after an attack a day earlier in Hub, about 25 km from Karachi, September 16, 2013. PHOTO: REUTERS

QUETTA: At least nine tankers carrying fuel for Nato troops in Afghanistan were destroyed after an explosion in one of the vehicles triggered a huge fire in Hub, Balochistan late Sunday, officials said.

It is not clear what caused the blast, said authorities, as they investigate whether it was an act of terror or an accident.

The incident took place some 45 kilometres from Karachi where the tankers were loaded with oil before setting off for Afghanistan.

“First a blast took place and then more than nine Nato oil tankers caught fire. We are investigating the cause of the blast,” Ahmad Nawaz Cheema, a senior police official in the area, told AFP.

No one was killed or wounded in the incident which took place as the drivers were eating at a roadside hotel after parking the tankers, he added.

Overland oil shipments to Nato troops in landlocked Afghanistan resumed through Pakistan less than two weeks ago under tighter security after a five-month suspension due to attacks.

The contractors had stopped driving oil supplies from Karachi to the Torkham crossing on the Afghan border due to frequent strikes on their vehicles.

The Nato combat mission is due to end next year. Pakistan and the United States have signed a deal allowing Nato supply convoys to travel into Afghanistan until the end of 2015.