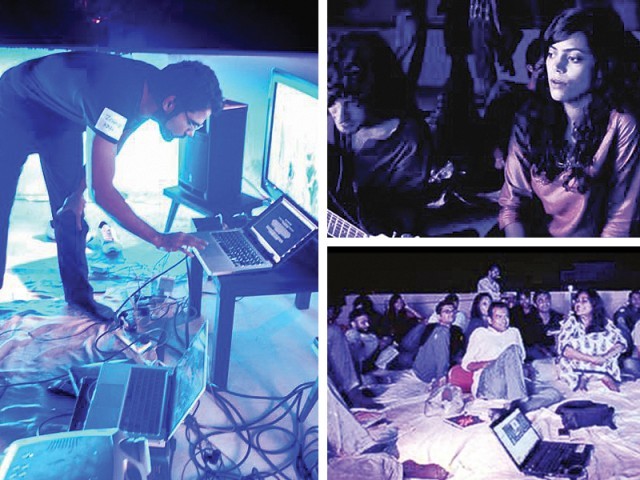 Instead of a conventional press conference, Zohaib Kazi held a bloggers’ meet-up on his rooftop for the screening of his new video. PHOTOS: PUBLICITY

Zohaib Kazi is no new name in the music arena. He has been active in making music and has been a part of many projects, which have gone on to become hits. The unique aspect of his music, as well as his personality, is his calm attitude. His media appearances have only come forth after the release of his first video, Black Coffee  — Khawabon Mein, where he has collaborated with Abbas Ali Khan, Omran ‘Momo’ Shafique, upcoming songstress Sara Haider and talented guitarist Imam Hamdani.

To screen his video, Kazi came up with a rather innovative idea. While artists arrange press conferences to unleash their musical work, he organised a blogger’s meet-up instead where minds met and shared their views directly through Twitter, Facebook and other forms of social media. It was an interesting concept as people from different backgrounds socialised on Kazi’s rooftop over crackers and chilled soft drinks. “Zohaib’s music is top-notch! I don’t know him much but by the looks of it, the dude is going to rock it off,” says Umar, who runs a Western music blog.

In addition to the video’s screening, Shafique, Haider and Hamdani’s presence proved to be another flash-point for the gathering. Kazi played a couple of his mixed songs to the attendees and explained the background of his novel-based album, Ismail Ka Urdu Shehar. The night, which turned out to be a marvelous affair, ended with a few acoustic performances.

How was the collaborative experience of working with Zohaib Kazi on Black Coffee?

Abbas: I found this concept very unique and interesting. I mean who has ever done an OST for a novel? Plus, when I heard what the novel is all about and considering my love for Sci-fi, I said YES.

Shafique: It happened unexpectedly.  I went to the studio to record a different song for Zohaib.  While I was there, Zohaib mentioned another song.  I loved it and just went in and randomly played some licks.  Quick and easy.  Zohaib has some really creative ideas.

Haider: Zohaib’s album was a truly ‘collaborative’ creation. I feel almost as close to his work as I do to my own because despite having a very detailed and well thought-out concept, he was open to my ideas and accepting of criticism. His intension all along was to have all of us, be as comfortable with his work as possible, which is a massive risk, but it paid off!

Abbas: I think social media is the present and future of how music will be heard. It has not replaced TV completely, but has definitely affected viewership.

Haider: Social media is a niche market in our country, but a powerful one. Television is the predominant medium of information, but social media is ours — we produce, consume and create. A YouTube (sorry VIMEO) clip of a cat playing the piano gets more hits than a Rs2 million advertisement. Nobody is controlling what we watch.

Hamdani: Social media has replaced television as far as the music industry in Pakistan is concerned.

Shafique: It’s a great unfiltered way to communicate with people. It’s the new reality.  The bloggers meet was [definitely] interesting.

How do musicians make money?

Abbas: Musicians only make money from live shows. Small gigs are picking up instead of huge concerts due to security conditions, but I’m really hopeful that the rise of Pakistani cinema will change things. But right now, they do day jobs and whatever they make, they spend a percentage of that on their music, hoping that someday they will kick the job and rely on music only.

Shafique: It has been increasingly difficult for musicians to make a decent living…but it is possible.  It helps to know all aspects of the music business…from recording to marketing… it’s a pretty DIY scenario.

With the world coming closer via the internet, do you see yourselves competing against high-budget productions of other countries?

Abbas: If we stay true to our music and offer something new, we can compete because at the end of the day, it’s the content that matters. A simple idea can also get noticed if it connects with the audience.

Haider: I think it just means you have to do things musically that you wouldn’t do otherwise, and still be true to your own sound and direction. It’s tough!

Hamdani: I think the internet is a perfect way for us to leap out and learn about different productions all over the world. More than competition, it’s a way for us to enhance our skills and production capacities.

Shafique: The only thing we can do is make music to the best of our abilities.  The internet shows us that anyone can make a hit song…no matter the production budget.

Did you know? Middle Eastern prince pays $500,000 to meet Stewart