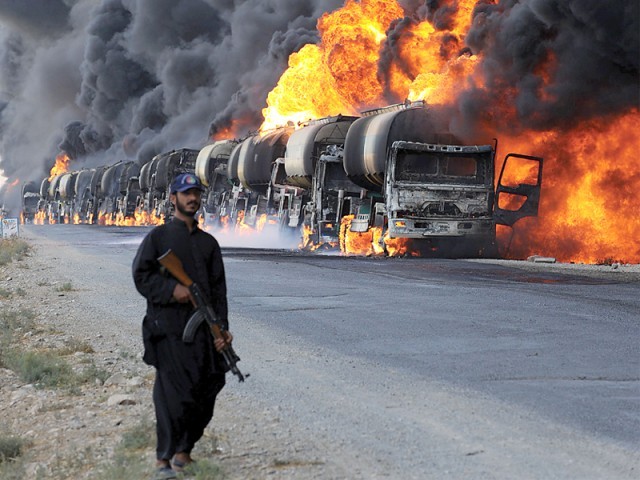 File photo of a policeman standing next to burning Nato supply oil tankers following an attack by gunmen. PHOTO: AFP/FILE

The attackers fired rockets and bullets at the convoy of 15 oil tankers traveling from Karachi to landlocked Afghanistan.

“The gunmen attacked the convoy at a rest stop in Soorab town of Kalat district. They fired rockets and bullets on the convoy from both sides of the road,” police official Yousaf Reiki said.

“One driver of a tanker died in the attack while eight tankers were burnt,” he added.

There was no claim of responsibility but the Taliban have in the past said they carry out such attacks to disrupt supplies for US-led NATO troops fighting in Afghanistan.

The NATO combat mission is due to end next year. Pakistan and the United States have signed a deal allowing NATO supply convoys to travel into Afghanistan until the end of 2015.