The show must go on…: No swan song for Teen Beat

The show must go on…: No swan song for Teen Beat

Masood Parach­a’s demise on August 18 ended his 35-year-long affair with music, but his store remain­s open.
By Our Correspondent
Published: September 6, 2013
Tweet Email 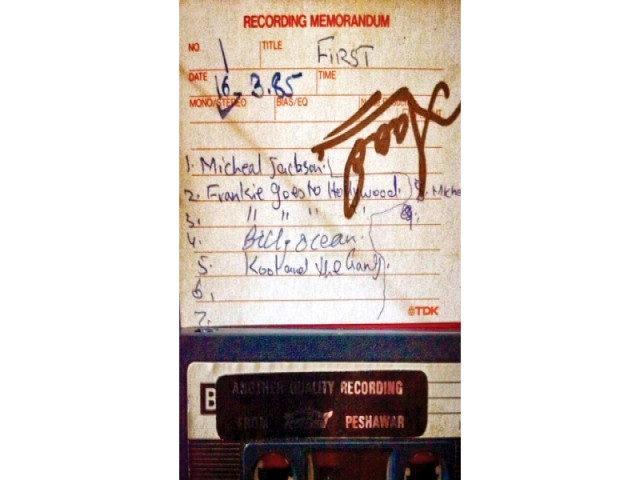 This selection was recorded by Teen Beat in 1985. When did you get yours first? Photo courtesy: TEAN BEAT’S PESHAWAR FACEBOOK PAGE

While the city’s arts and culture suffocates, Teen Beat remains a corner stone (and corner store) for music lovers across the province. The demise of its owner has taken away the man who supported music in the worst of times, but his shop remains open.

This small music shop on University Road has stood its ground while artists and musicians have been driven to safer ground. Situated in a dusty lane close to Gul Haji Computer Market – the largest hub of used computer dealers in Khyber-Pakhtunkhwa – Teen Beat’s struggle was probably more a result of Masood Ahmed Paracha’s love for music than any monetary incentive or market dynamics.

Paracha’s demise on August 18 ended his 35-year-long affair with music. But his narrow musty shop still invites a browse – rack after rack stacked with music dating back to the 1930s. The chalky feel of jackets and dust bunnies greying the shelves mark weariness, not neglect.

On the right, Paracha’s wood-panelled corner, where he would always be perched on a swivel chair, is now empty except for piles of cassettes. Closer to the main entrance on the left, his assistant Nasir Khan sits behind an old glass showcase plastered with a fading music chart poster. “Hot hits for a chilling winter”, it reads,  listing tracks by the Eagles, Backstreet Boys, Scorpion, Akon, Evanescence, Celine Dion, Linkin Park, and Madonna, to name a few.

Around a year and a half ago, Paracha’s health deteriorated after which he gradually stopped coming to his shop, said Khan, who is in his forties and sports a salt and pepper beard.  Paracha was not diagnosed with any illness, it seemed old age consumed him slowly, explains Khan. “His food intake decreased and he spent his last days within the confines of his home.”

Paracha set up Teen Beat in 1977 while Khan joined a decade later in 1987 and has been a part of the joint ever since.

Looking back at the era when Teen Beat opened its doors to the public, its namesake could very well have been a then popular American entertainment magazine geared towards teenagers or even a Sandy Nelson song from 1959. “Music was a personal love and then Paracha made it his profession.”

The shop owner also nurtured a second passion, for books. “He was a regular visitor at the Oxford University Press’ Peshawar office,” and was an avid reader with a well-stocked library at home. According to his assistant, Paracha would make a beeline for new books he would hear about.

The wall of fame

Khan, who is as much of the shop’s history as its peeling posters and treasured records, remembers Teen Beat’s heyday when singers like Ijaz Hussain Hazravi, Sardar Ali Takkar, Gulzar Alam, Humayun, Zaek Afridi, Haroon Bacha and Fayaz Kheshgi used to frequent it.

While it does sell CDs, the shop still stocks cassettes and LPs but Khan has lost count of how many.

According to the lone shopkeeper, Teen Beat survived the advent of music on mobile phones and online streaming only because it offered quality. “The quality we offer is missing from both mobiles and the internet,” says Khan, not without a pinch of pride.

However, he is not so optimistic about the future. People turn to music when they have peace and money to spare, reminisces Khan. “Presently, there is neither… I’ll continue to run the shop as long as I can.”