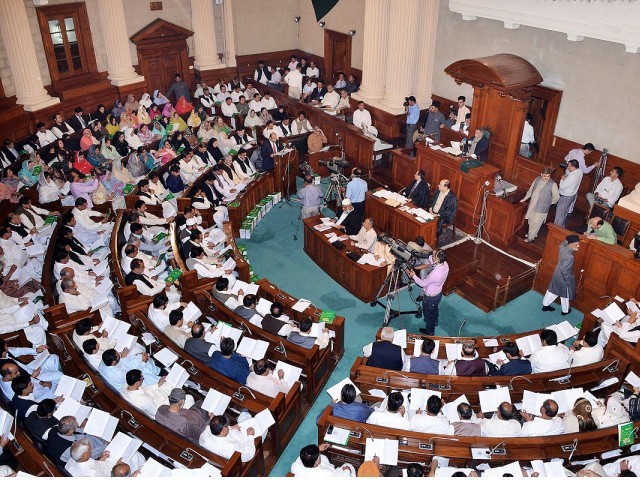 The amendment bill states that 50 per cent of SI seats must be filled through recruitment by the Punjab Public Service Commission (PPSC). PHOTO: Online/FILE

The Punjab Assembly passed the Punjab Police Order Amendment Bill 2013 and the Muhammad Nawaz Sharif University of Agriculture Multan Bill 2013 with a majority on Thursday.

Law and Local Government Minister Rana Sanaullah moved the two bills, while the opposition moved various amendments to them.

The police bill sets a 25 per cent departmental quota for promotion to the rank of sub inspectors. Mian Alsam Iqbal of the PTI proposed that this quota be set at 50 per cent, as this would mean giving experienced police officials more of a chance to rise to the rank of sub inspector. Officers who have already served for some years as head constables or assistant sub inspectors would know more about how to deal with crime than officers recruited at the SI rank, he said.

In a response to Iqbal’s remarks, Sanaullah said that the government aimed to transform ‘thana culture’ by putting educated, dedicated and trained officers in charge of police stations and criminal investigations.

The amendment bill states that 50 per cent of SI seats must be filled through recruitment by the Punjab Public Service Commission (PPSC). The minister said that the government had hoped that the commission could start the recruitment right away, but it did not have the capacity and the process would take at least six months.

Therefore, he said, the government had decided to divide its strategy to reform police stations into two phases. In the short-term, the government had asked the inspector general of Punjab Police to identify the 1,600 best officers from among the 10,000 or so sub inspectors and inspectors in the department. These would be sent on a six-month training programme, after which they would be spread out among the 708 police stations in the province to take over investigation matters.

Meanwhile, in the longer term, the PPSC would recruit sub inspectors, who would then be sent for two years of training in modern crime-fighting and investigation techniques. Once their training was over, they would be assigned to police stations to replace the earlier batch of SIs.

Sanaullah said that improving any department required improving the human resources at its disposal. He said that a single dedicated, honest and hardworking district police officer or SHO could make a huge difference.

Most of the discussion on the second bill revolved around its name, with the opposition suggesting that the proposed agriculture university in Multan be named after Muhammad Ali Jinnah rather than Nawaz Sharif.

Opposition members said that universities should not be named after serving political leaders, since they were built with taxpayers’ money. They said if not after Jinnah, the university should be named after one of the prominent Sufi saints of Multan.

Dr Waseem Akhtar of Jamaat-i-Islami said that politicians had a habit of putting up plaques with their names at construction sites, only to see them later removed, leaving a hole in the wall.

Sanaullah said that there were many precedents in the country of universities being named after serving leaders, like the Ghulam Ishaq Khan Institute in Swabi. He said that though later governments could have renamed the institution, none had done so.

He said that Nawaz Sharif deserved to the honour of a university in his name, as he had been prime minister when Pakistan became an atomic power by testing a nuclear bomb in 1998. Referring to the international pressure on Pakistan to desist from a nuclear test at the time, shortly after India had conducted one, the minister said that a four-star general had bowed before the United States upon receiving one phone call from the secretary of state, but Nawaz Sharif, in his shalwar kamees and waistcoat, had not bowed down despite receiving several telephone calls from then US president Bill Clinton.

He added that there was already a university named after Quaid-i-Azam in Islamabad, so there was no need for another.

The amendment for the renaming of the university, along with 16 other amendments to the bill proposed by the opposition, was defeated.

The house, which started proceedings at 11.50am on Thursday, will reconvene on Friday morning.