A crazy response to crazed behaviour

A crazy response to crazed behaviour

The overre­action by the media turned Sikand­ar into a very import­ant man.
By Umer Nangiana
Published: August 19, 2013
Tweet Email 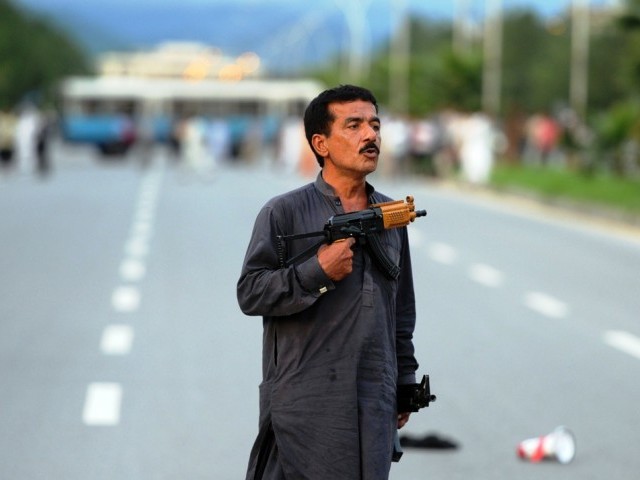 A single man, wielding two Dara-made 30-bore guns, managed to engage police and security forces for over five hours right in the heart of the federal capital. PHOTO: AFP

He was no trained militant. Neither did he belong to any extremist group. Yet a single man, wielding two Dara-made 30-bore guns, managed to engage police and security forces for over five hours right in the heart of the federal capital.

This was the infamous Sikandar of Islamabad’s Jinnah Avenue.

No conspiracy theories. It was plainly a case of one crazy person addicted to drugs taking up arms borne out of a self-belief that he was primed for some sort of Jihad. What exactly he was going to fight and who his target was remained a mystery to the man himself.

He soon realised it was not easy pulling out of the mess he created for himself and his family that he had brought along. But he did want to get out of it safe with his wife and children.

The police knew from the beginning that the man would not be able to hold out for very long and would eventually give up.

But two entities made it difficult for him to do that. First was the electronic media and second the special appearance of a politician, who, having had a whole legacy of heroes behind him in his party, performed the fitting final stunt for the television cameras.

The television cameras arrived at the scene from every corner of the capital. Within minutes, Sikandar and his wife were broadcast all over the country. Soon, the drama became a spectacle for the local populace, who flocked the crime scene in hundreds.

This overreaction by the media turned Sikandar into a very important man. Soon, the couple started speaking like great revolutionaries who had tread a noble path of guiding the misguided. The media attention made it impossible for the couple to surrender without saving face.

It took them five hours to finally give up. They decided to accept the police’s offer to move to a safe place indoors and ‘negotiate’ Sikandar’s demands. Police sources said Zamarud Khan, the politician, appeared right at that moment out of nowhere.

He had no knowledge of the deal between the police and Sikandar. Similarly, the gunman and his wife thought Khan was from the police party who had come to take them to the safe place assured by the police commander.

The plan was to take Sikandar to a police facility, where he would be disarmed. The gunman had agreed to the plan, however, he did not agree to drop his weapons. This was natural for an addict but once away from the public and having only 12 bullets left in his two guns, Sikandar was in no position to put up much resistance to the police disarming him.

But then came Khan. Underestimating the gunman’s agility, Khan thought he would neutralise the drug addict without much effort. He should be thanking the same drug addict for sparing his life while he was down on the ground right at point-blank range.

Khan forced the police to take the violent route they had been avoiding all along because the crazy gunman had two innocent minors with him who had no idea about the mess they had been put in.

The children had a narrow escape when guns roared. But they may never be able to get the horrible sounds of rattling off their minds.

However, the main fault for prolonging the episode still lies with the police. They were clueless about tackling the rampant media and they had no plan to plug the inflow of people to the crime scene.

Above all, the entire police department did not have a single professionally-trained sniper who could easily have neutralised the gunman within minutes.