The Khaplu palace in Skardu has been restor­ed as a boutiq­ue hotel.
By ASHIQ FARAZ
Published: July 28, 2013
Tweet Email 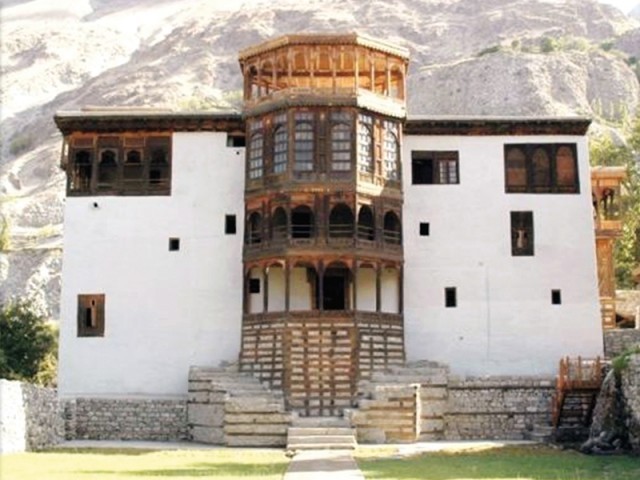 The Khaplu palace in Skardu has been restored as a boutique hotel.

When Khaplu Palace opened its doors to the public in 2011, people saw, for the first time in 40 years, the 19th Century royal home used by the Dogra rulers.

The palace was rescued by the Aga Khan Cultural Service of Pakistan that has restored and turned this Baltistan relic into a boutique hotel. It is located on the upper side of Khaplu Town, south of the River Shyok, in Skardu. Whatever is known about the town has come from the writings by the numerous historians, explorers, researchers and British Indian officials who trekked Skardu’s glaciers in the 19th century.

Prior to 1840, when the Dogras of Jammu took over Baltistan during their trans-Himalayan conquests, the region was ruled by a family titled ‘Yabgo’ (leader). The Yabgo family shared roots with the monarchs of Chinese Turkestan or Xinjiang today. The Yabgos are said to have governed from Thorsikhar, a fort strategically located on top of a cliff. However, once Baltistan was captured from them by the Dogras, it was decided that the ruling seat would be shifted from Thorsikhar fort to another location.

The Yabgo family offspring, who currently live in Khaplu Town, recount that after consultation with Yabgo Raja Daulat Ali Khan, the Dogras chose a site for their new palace by rolling a boulder from the top of a cliff adjacent to the Thorsikhar. The stone came to rest at Doqsa village where Khaplu Palace was then shaped with the aid of Kashmiri and Balti artisans.

The palace is a four-storey building primarily built of timber. The structure was strengthened and moulded with poplar wood and mud adobes together with a clay and soil mortar. The building’s infrastructure was fortified with stone masonry that was reinforced with timber and lime plaster in order to render the structure earthquake-resistant. Its main façade is embellished with a decorated octagonal wooden balcony whose doors and ceilings at each level display the finest Kashmiri, Tibetan and Balti motifs. If you look closely you will see the floral patterns, swastikas and geometric designs which historians believe were influenced by Persian, Kashmiri and Tibetans styles.

In contrast to other forts and palaces in Gilgit-Baltistan, Khaplu Palace had separate levels for ministers, servants, aides and one separate level for the royal family. So there was the Chogoraftal (royal meeting room), Chogojarokh (royal balcony), Lainakhang (princess dressing room) and Rani (queen) rooms.

After the independence of Pakistan in 1947, the people of the area annexed the whole region with the country. Even so, the Yabgo family managed to retain their power, that is, until 1972 when Zulfikar Ali Bhutto abolished the feudal system and the royal family gradually lost command over the administration. Since then, power has gradually shifted to local representatives. The rulers of the royal family of Khaplu continued to be respected by the residents of Khaplu Town but they were no longer revered as an icon of influence.

As the fortunes of the ruling family waned, so did their palace. Since the area is also prone to severe winter temperatures, the palace succumbed to the erosion brought forth by Skardu’s annual snowfall. The structure’s skeleton and timber décor deteriorated, leaving the building’s shell battered. Visitors and trespassers added to the destruction by scratching their names into the mud walls. The wooden carved jallies went missing.

In 2005, the Aga Khan Cultural Service Pakistan approached the community of Skardu to rehabilitate the palace. The service had already worked on other places in the area, including the 400-year-old Shigar Fort.

After surveys and documentation by a conservation specialist, local technical teams went to work, only taking a break during the harsh winter months. It took six years. Hundreds of Balti labourers and artisans were employed and more than Rs25 million was distributed in wages. Materials worth Rs30 million were purchased for the restoration work. Dozens of Skardu residents received technical expertise in wood-carving, carpentry and masonry work which will prove invaluable for future projects.

In order to sustain the legacy of the palace, the property, along with its ancillary buildings, was converted into a heritage guesthouse and museum. The revenue that this generates is distributed to the community and a sufficient amount of the proceeds is kept aside for maintenance and as a reserve fund for property.

If you fancy visiting you can take a 50-minute flight from Islamabad to Skardu. The resort provides transport from the airport. There is a choice of 21 rooms and eight suites but they aren’t cheap at the minimum of Rs12,000 per night. The best time to go is June, July and August with temperatures ranging from 14 to 20 degrees Celsius. A polo ground is located down the road and matches are held every weekend. Guests can also visit the Gulzar fish pond nearby and fish for trout or take a lengthy tour of the palace and its rooms, which are stunning in their restored splendour.

Over the top: Misreporting on location of Nanga Parbat attack