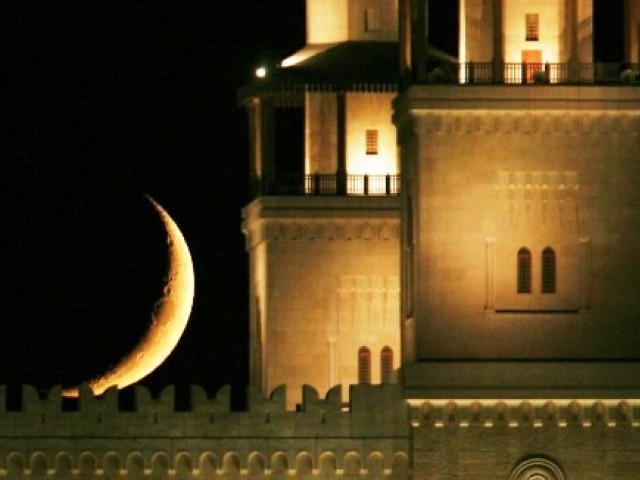 Ramazan is expected to begin on Thursday. PHOTO: REUTERS/FILE

KARACHI: The Ruet-i-Hilal Committee said on Tuesday that the Ramazan moon could not be sighted on Tuesday, Express News reported.

Ruet-e-Hilal Committee Chairman Mufti Muneebur Rehman said that they received no reports of moon sightings from anywhere in the country, including from Khyber Pakhtunkhwa. Hence, the first Ramazan will be on Thursday July 11, 2013.

The decision was also endorsed by cleric Mufti Shahabuddin Popalzai in Pesahwar.

Earlier, Express News reported that per sources in the Ruet-e-Hilal committee, no reports of citing the moon was received from the zonal committees.

The committee had convened to form a decision on the sighting of the moon, which is to mark the beginning of Ramazan in the country.

Ruet-e-Hilal Committee Chairman Mufti Muneebur Rehman oversaw the committee proceedings in Karachi, which had convened in the meteorological department’s office.

Rehman had said the decision will be formed on the basis of sightings by the zonal committees and asked everyone not to contact him before the official decision was announced.

He said the committee will come to a decision after consensus, as prescribed in Shariah law.

The session in Peshawar was presided by Mufti Shahabuddin Popalzai.

The Pakistan Meteorological Department had said that the moon should ideally be sighted between 7:12 pm to 7:43 pm but chances of it being sighted are low.

Earlier, during the day, the government unveiled a Rs2 billion Ramazan relief package providing subsidies on 13 essential items and selling about 1,500 items on reduced rates through the Utility Stores.