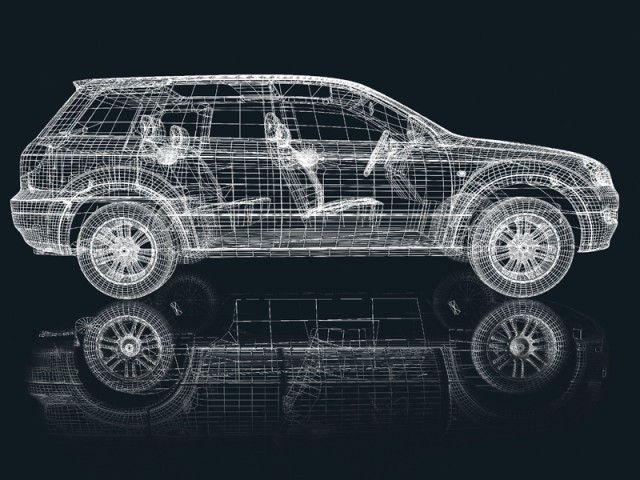 Things are getting worse. Here’s how to suit up. PHOTO: AMEER HAMZA

Zain is realist enough to know he is at risk of being kidnapped. He is a young businessman at the helm of an empire in the making. But with the acquisition of his bullet-resistant ‘monster truck’, he knows he is a harder target to get at. Heck, for the purposes of this article we’ve even had to even insert distance between him and his real name in this paragraph.

His rich friends would be well advised to pimp their rides too. “They have become paranoid,” he admits, referring to the extreme and real risk of becoming a target on the streets of Karachi. “Their stress levels are going through the roof. They hide their cell phones when in the car; they don’t go out at night.” As for Zain in his ballistics-defying Vigo? “If a guy comes up, he’ll need a specific type of gun. I flip him the finger and say: Give me your best shot.”

That is the confidence a bullet-resistant vehicle can give you. Zain sums it up: “I am in my own little green zone.”

Given the Zains of Pakistan, companies catering to vehicle armouring needs have gained traction.

Thirty-five kilometres east of Karachi’s city centre, workers in a non-descript red warehouse are carefully stripping a Toyota Land Cruiser. The interior trim, wiring, carpet, seats, air bags and dashboard are all taken out until only the skeletal frame remains. Behind it, other workers are welding plates of steel to another Land Cruiser.

“As you can see, we have three lines working simultaneously,” says Faisal Saleem. “We work on the Toyota Corolla, Land Cruiser, Hilux Vigo, Tundra, Fortuner and Camry.”

Saleem is the manager of operations of Streit Pakistan (Pvt) Ltd. With plants and offices in Iraq, Afghanistan, Nigeria, India, Mexico and Pakistan, Streit provides armouring facilities across the globe. While terrorism and insecurity has put a damper on business in Pakistan, the increased violence has become a boon for the security sector, including the armoured car industry. “There has been a surge in demand recently and we are currently armouring at least 10 to 12 cars per month,” says Shahzad Salim Godil, director of Streit Pakistan.

Previously, anyone in the market for an armoured personal car had to either import one or send their car to Dubai to be armoured. The cost of both these options is ridiculously high. Sigma Motors Ltd Pakistan, the official supplier of Land Rover 4x4s in Pakistan, currently offers two types of ready-made armoured cars — the Range Rover Armoured for around Rs65 million and the Discovery 4 Armoured for around Rs40 million (prices as of June 5). Both vehicles provide B6 levels of ballistic protection and come with a full Land Rover warranty. Compare that to local armouring companies that will retrofit your car starting from Rs2.5 million. Armour Infinity Pvt Ltd in Islamabad offers customers all three choices: importing armoured cars for them, armouring their cars by sending them to Dubai or getting it done in Islamabad.

Journalist Ali retrofitted his car after a number of threats to his life. “It cost me around Rs5 million to armour my car locally,” he says “It was quite expensive but it’s a small price to pay for protection.” Ali is a satisfied with his vehicle and goes to great lengths to prove his point. “I am an avid gun collector and I have, on occasion, fired a few rounds at my armoured car to show its capabilities to friends.”

If you are in the market for one, there are certain things you need to know about armoured cars to assist you in making a wise purchase. Firstly, it’s important to understand that an armoured car is bullet-resistant and not bulletproof. Secondly, the cars are not meant to withstand sustained fire. This means that if your armoured car does come under fire, your first concern should be to get out of the range of your attackers as soon as possible. While armoured cars offer extensive protection against certain handguns and rifles, they cannot provide total protection from all types of small arms fire.

There are several internationally recognised standards of bullet-resistance. The most commonly used rating system used in Pakistan is the EN 1063 or CEN 1063. It is used to form a ballistic classification system by which armoured vehicles and structures are tested and rated. The protective strength of an armoured car is rated on the type of munitions or threat level it is capable of withstanding (see table). There are seven main standard threat levels: BR1 to BR7, each corresponding to a different type of small arms fire. To be given a particular rating, the armour must stop the bullet for a specified number of strikes, with multiple strikes placed within 120mm of each other. The glazing should also be shatterproof and not crack after each strike.

“Before we do anything to the car, we require a non-objection certificate (NOC) from the Ministry of Interior,” says Omar Khan, the director of the armouring division of Omar Jibran Engineering Industries Ltd. OJ started manufacturing car bumpers, instrument panels, radiator grilles in 1990. Over the past 25 years, it has become a supplier for local car assemblers and has also diversified into the armouring business. “We can guide our customers about the proper procedure and requirements of getting an NOC but they have to get it themselves,” he adds.

After the NOC has been received and verified by the armouring company, a preliminary consultation process take place. The car is checked, the level of protection needed by the client is estimated and a quotation is provided.

“The first step is to check the model of the car and how long it’s been used. It cannot be more than five years,” says Khan. “The protection level depends on the engine. If the customer brings in a 1.6-litre sedan, like the Toyota Corolla, we recommend B5 level of armouring.” Anything less than that and they recommend B4 armouring. If the car has a 2.4-litre engine and above they recommend B6.

The cost of armouring a personal car varies from company to company. “Armouring a car through Streit will cost you between Rs3 million and Rs4.5 million,” says Godil. Conversely, Omar Jibran Engineering will armour a B5 Sedan for Rs2.5 million (subject to GST) and a B6 SUV for Rs3.2 million.

“The most expensive parts are the raw ballistic steel sheet,” says Godil. “These sheets are imported from the west and are laser cut in our factory in Ras Al Khaimah, UAE. They are cut into the exact sizes required for the armouring of each car.”

The armouring process itself is no easy task. It involves ripping up a vehicle, down to the undercarriage, and rebuilding it after armouring it with steel plates. Similarly, ballistic metal is added to the floor of the car to protect from grenades thrown under it. Then the doors and all other cavities (such as the pillars) are cut open so ballistic metal can be inserted into them.

“Some armouring companies opt to use multiple pieces of the ballistic sheets stitched together to create patchwork armour since it is cheaper,” says Godil. “This is dangerous as the sheets have to be welded together and any gap would make the armouring process redundant.”

If the doors get too heavy, heavy duty hinges are added. The firewall (everything surrounding the engine) and rear bulkhead (the partition between the cab and the load space) is also armour-plated. The stock bumpers, designed to crumple and absorb energy during major impact, can be reinforced with front rams and additional radiator protection. Door frame overlaps are added to prevent bullets entering from the gap between the doors. The goal of armouring is also to make the car appear to be unmodified, inside and out.

Apart from the ballistic metal, all glass surfaces are replaced with bullet-resistant glass. The glass is made up of several layers and looks just like an ordinary pane. When a bullet is fired at it, it will only pierce the outside layer of the glass. The layered polycarbonate-glass material will absorb the bullet’s energy and stop it before it exits the final layer.

Next, the tires are replaced with Run-flat tires. These tires are designed to resist the effects of deflation when punctured, and enable the vehicle to continue to be driven at reduced speeds for limited distances.

Even the lightest armouring adds weight to the car, however. “The armouring process adds about 1,800 kilogrammes to a Land Cruiser and mileage is affected by as much as 30%,” says Godil. Most modern engines in large 4×4 vehicles have enough power to sufficiently cope with the extra weight. To maintain drivability, though, the suspension is reinforced to compensate for the additional weight. In some cases, the braking system is also changed.

The entire process takes anywhere between three to six weeks and both companies provide service plans and local warranties. “We provide a two-year warranty or 20,000km, whichever comes first,” says Godil. It is possible to sell an armoured car but since the vehicle is taken apart for the armouring process, the value is greatly affected. If you decide to remove the armouring before selling it, the car would be in pretty bad shape. And if your armoured vehicle has been fired at, customers are advised to bring it back into the warehouse for a check.

How do customers feel? One senior police officer who recently acquired an armoured Vigo says he feels safer but it has been an ugly necessity. And as for Zain, he’s blunt: “It has made a huge difference in my life and I can’t imagine not having it now.”