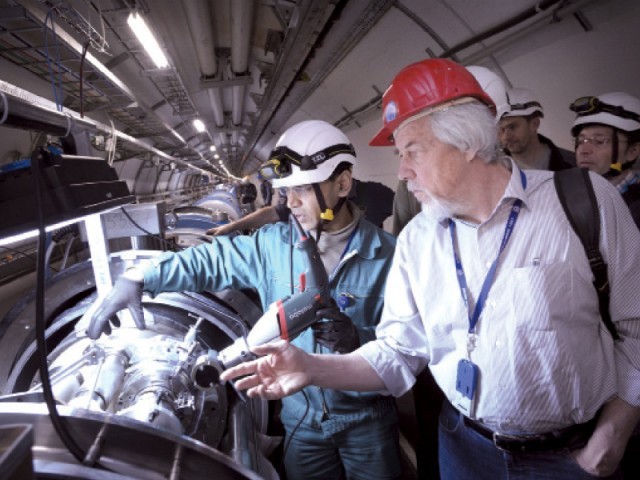 Many Pakistanis may not be aware that their country’s contributions to some of the most important scientific experiments and discoveries in the world did not end with the late Dr Abdus Salam, the only Pakistani ever to win the Nobel Prize in Physics.

In fact, at the European Organisation for Nuclear Research (CERN), not only did electronics manufactured in Pakistan help in the detection of the Higgs boson, the elementary particle scientists believe imparts mass to all particles, Pakistani engineers and technicians are also currently participating in repairs of the Large Hadron Collider (LHC), the highest energy particle accelerator in the world.

Pakistan’s collaboration with CERN, the world’s largest particle physics laboratory, first started in 1994 through the efforts of the Pakistan Atomic Energy Commission (PAEC), said Dr Hafeez Hoorani, the director of research at the National Centre for Physics (NCP) in Islamabad. The NCP became a part of PAEC’s collaboration with CERN after it was established in 1999.

At present, the NCP is one of the hundreds of grid nodes in the world that receive scientific data from the LHC, which are being used by NCP researchers and students.

“We as a nation should be proud of the fact that today Pakistan is part of an experiment which is the most exciting and challenging experiments of all times,” Hoorani, who has worked at CERN himself, said. “This project helps our students get involved in cutting-edge research.”

The LHC collides two high-energy, unbelievably fast beams of elementary particles, so scientists can test scientific models on the interaction of subatomic particles.

The Higgs boson — until the announcement of its discovery on July 4, 2012, the Higgs was the only missing element in the Standard Model of Physics, a model that Salam contributed to through his work on electroweak theory — decays instantaneously, so scientists had to confirm its existence through particles formed by its decomposition.

One of those by-product particles, a “Muon,” is detected by the CMS and Pakistan has been a full member of the CMS experiment since 2000.

Hoorani said around half of the events detected by the CMS, which were consistent with the hypothesis of the Higgs boson, were observed using detectors made in Pakistan.

The construction of these detectors, called Resistive Plate Chambers (RPCs), was made possible by the work of 15 physicists, 10 engineers, five Lasers and Opto-electronics experts, six computer professionals and 20 students from NCP and PAEC, Hoorani said.

The process included assembling and testing of 288 RPCs, the fabrication of mechanical pieces for LHC and the design of tracker alignment for the CMS. The PAEC also assembled carbon frames for the detector’s outer barrel at a cost which is approximately one-third of the European cost. In 2006, CERN awarded PAEC its Best Suppliers Award.

If that is not enough, two teams of Pakistani experts are participating alongside teams from Greece, Bulgaria, Poland and Italy in the LHC’s maintenance process that will continue till the end of 2014.

Twenty-eight people were selected from Pakistan after interviewing candidates from NCP, PAEC, the Heavy Mechanical Complex in Taxila and Precision Engineering in Karachi, Hoorani said. The engineers and technicians were trained at a mock-up facility at PAEC to familiarise them with the LHC environment and tools.

One six-member welding team and a six-member mechanical team have been working in Geneva, Switzerland, where CERN is located, since April on a nine-month shift.

NCP Director General Hamid Saleem said Pakistan is also trying to extend its collaboration with CERN in the coming months.