Akbar Bugti died during an army operat­ion in August 2006 when Mushar­raf was head of state.
By AFP
Published: June 14, 2013
Tweet Email 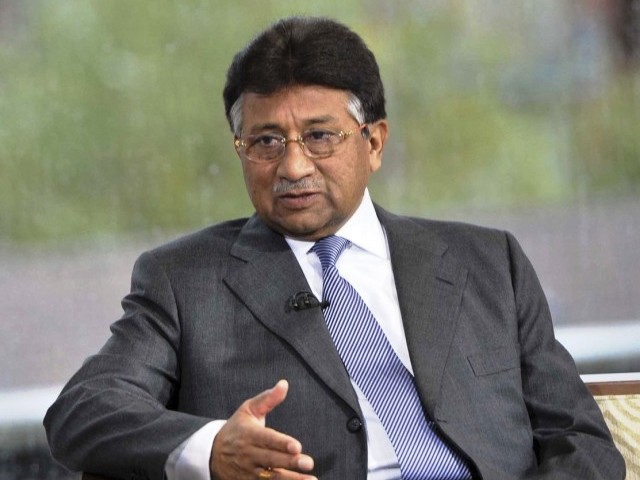 ISLAMABAD: Former president Pervez Musharraf has been formally arrested on suspicion of Akbar Bugti’s murder despite winning bail in two other cases dating back to his 1999-2008 rule, a lawyer said Friday.

Musharraf was head of state when the main rebel leader in the southwestern province of Balochistan, Bugti, died during an army operation in August 2006.

Musharraf, who returned from four years of self-imposed exile in March, has been under house arrest at his villa on the edge of Islamabad since April 19.

“He has been formally arrested in the Bugti murder case,” his lawyer Ahmed Raza Kasuri told AFP.

“An anti-terrorism court has put him on a 14-day judicial remand… He will remain in custody in his Islamabad house,” Kasuri added.

“Musharraf had to appear in court in Quetta but for security reasons the police team from Quetta came here to Islamabad,” Kasuri said.

Mohammad Nadeem, a member of the Quetta police team, confirmed the formal arrest.

Musharraf is barred from leaving the country, but his legal team is hopeful of getting him bail in the Bugti case and permission for him to go abroad.

The two other cases against him are conspiracy to murder former prime minister Benazir Bhutto and his sacking of judges in 2007.

The Supreme Court is hearing a separate petition from lawyers demanding that Musharraf be tried for treason for sacking judges in November 2007.

In Pakistan only the state can initiate charges of treason, which can carry the death penalty.

Bugti led an armed campaign to press for provincial autonomy and a greater share of profits from natural resources in Baluchistan.

The death of the colourful, British-educated chieftain sparked angry protests in the country.

Opposition leaders at the time accused the Musharraf government of targeting him.

At least seven soldiers and 17 tribal insurgents were also killed during fighting and air strikes.