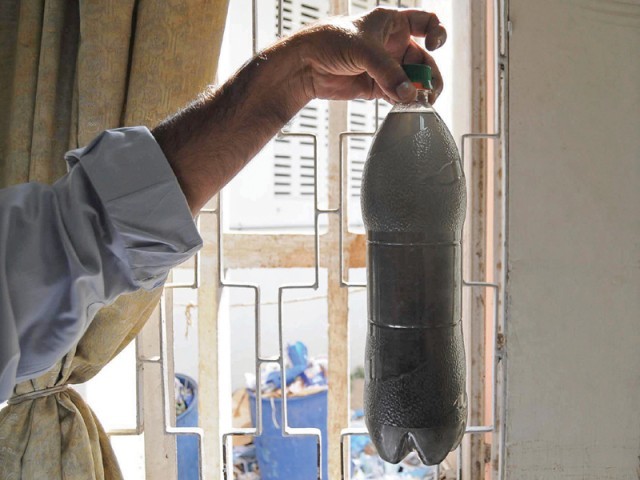 A resident of North Karachi holds up a bottle full of tap water inside his home. Research has led health experts to believe that water supplied to a lot of areas in the city isn’t fit for consumption. PHOTO: FILE

Research conducted by the Pakistan Council of Research in Water Resources (PCRWR) has led experts to believe that in the city by the sea, there’s hardly any potable water.

As a part of the research, 28 samples of water were collected from different localities of Karachi. Of them, only two were fit for consumption. Rubina Jaffri, the general manager of Health and Nutrition Development Society (Hands), used this research as one of the many examples in her talk on the city’s water supply at Urban Resources Centre on Wednesday.

She said that 86 percent of the water samples were contaminated with pathogens which cause diseases, such as cholera, typhoid, bacillary and hepatitis.

Jaffri added that approximately 640 MGD of water is being supplied to Karachi, out of which 440 MGD is being filtered at seven filtration plants. She added that 20 per cent of the water is lost because of leaking pipes while 15 per cent is siphoned off by water thieves .

She added that the water board doesn’t adequately filter the water, which is why its quality is compromised – according to Karachi Water and Sewerage Board (KWSB), 60 percent of bulk water supply is filtered while around 40 percent is chlorinated.

Jaffri told the audience that in Pakistan, the mortality rate for children under the age of five is 101 deaths per 1,000 and diarrhoea – one of the biggest killers – emerges from contaminated water and poor hygiene.

She added that in a survey conducted by Hands, 93 per cent of the respondents said they use tap water for household chores. Nine percent buy bottled water while around 80 per cent just drink tap water, added Jaffri.

She said that after consuming contaminated water, both adults and children commonly report symptoms such as stomach pains, vomiting, diarrhoea, headaches and sore throats. Hepatitis is another real danger of consuming water which hasn’t been treated.  Some of the survey’s respondents stated that they used water without boiling or filtering it first. A portion of them said they boil water only when their children fall sick.

She told the audience that according to the UN Human Rights Policy, it is the government’s responsibility to provide people with an adequate amount of safe, filtered, potable water.