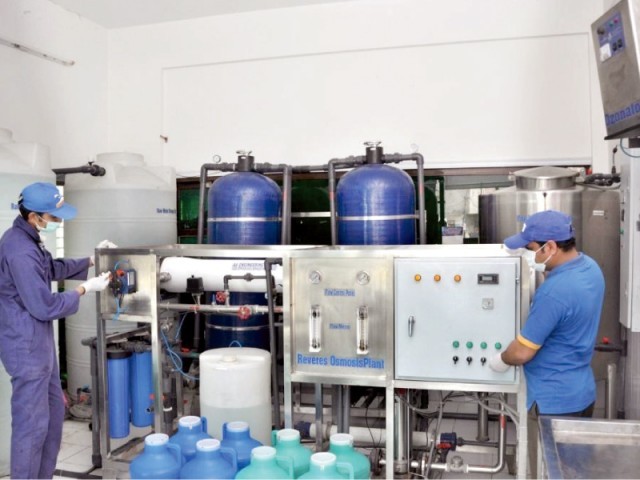 The company uses a reverse osmosis plant at its shops to purify water to World Health Organisation standards. That method is less energy intensive than boiling water, which is what many people in Pakistan do. PHOTO: FILE

Every day, tens of thousands of Pakistanis are not able to make it to work due to an illness contracted due to unsanitary water consumption, leading to income losses for many households, particularly those dependent on daily wages. One company, Pharmagen Healthcare, believes it has the answer in the form of affordable bottled water.

A joint venture between Pharmagen, a Lahore-based pharmaceutical chemical manufacturer, and Acumen, a New York-based social enterprise fund, Pharmagen Healthcare was founded in 2007 and is trying to make hygienic bottled water accessible to working class Pakistanis.

The need for its product is obvious. According to a 2006 study by the Pakistan Water Council, approximately 87% of the water consumed all over Pakistan is unfit for human consumption. Among the most vulnerable are people in low-income areas, which is why the company set up its first shop in Shadra, a low-income neighbourhood in Lahore, and currently has 16 shops in the Lahore metropolitan region.

Yet progress in convincing more people to use its product has been somewhat slow. “Buying water is just not on people’s shopping lists,” said Bilal Khan, the chief operating officer of Pharmagen Healthcare. “This was the key learning experience for us: that pricing would be less of an issue than getting people used to the idea of buying their water in bottles.”

To combat this hesitation, the company has sought to make it as convenient for its customers as possible. It offers free home delivery of the 20-litre bottles. Regular customers need only pay a Rs200 deposit to get bottles delivered regularly to their houses. And it has sought to explain the benefits of using bottled water to people who are not used to the concept.

“We estimate that an average family would require 12 cans over the summer. We have to tell them that their monthly cost of water will be Rs540 per month for clean drinking water. We explain to them that this cost is worth it in terms of savings on healthcare costs,” said Khan.

The average Pakistani household spends approximately Rs693 per month on healthcare costs, according to the 2012 Household Integrated Economic Survey released by the Pakistan Bureau of Statistics. Most of that cost is from water-borne illnesses according to a study conducted by the Water and Sanitation Program, a non-profit organisation.

Yet despite having the numbers on its side, the company has had some difficulty in becoming financially sustainable. Having been in operation for over six years, the company has a customer base of around 6,000 households in its home-delivery business, which accounts for about 70% of total revenue, with a capacity to increase that base to 10,000 with its existing infrastructure.

That customer level is not large enough to bring its overall costs down. “It costs us Rs60 to produce that 20-litre bottle that we sell for Rs45,” said Khan. “Most of that is fixed costs, so over time we expect our average costs to decline as we gain more and more customers and economies of scale.”

The company uses a reverse osmosis plant at its shops to purify water to World Health Organisation standards. That method is less energy intensive than boiling water, which is what many people in Pakistan do. The company uses food-grade plastic for its cans, and reuses the cans for a certain number of times, washing between each use, until the can is finally discarded after it hits its maximum number of uses.

Despite such frugal infrastructure, Pharmagen Healthcare is looking to partner with other consumer goods companies to help defray the costs of its marketing and education campaigns. It is also seeking government assistance to reduce the cost of setting up each shop.