With climate change, villagers become strangers in their own land

With climate change, villagers become strangers in their own land

Thousa­nds of acres in Indus Delta have become infert­ile.
By Ali Ousat
Published: May 26, 2013
Tweet Email 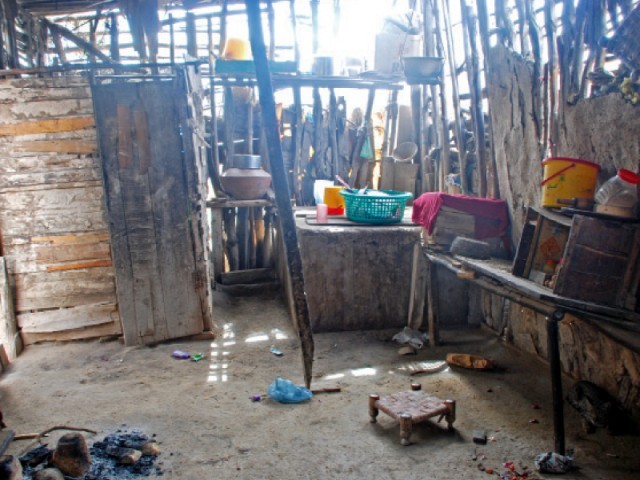 When Shah Abdul Latif Bhittai first said that a time would come when the fishing community would dwell along the mighty Indus River but still die of hunger, it was merely a couplet.

Today fishermen living in one of the hundreds of villages in the Indus Delta have truly understood what the great saint meant to say.

Nearly three hundred families living in Kharo Chan village – which in Sindhi language means ‘bitter jetty’ – have bitter memories to share. Allah Din, a farmer, said, “There was a time when the area was lush green and fertile. For nearly 150 years this area fed all of Sindh with its record rice and wheat produces.” But then, the Kotri Barrage was constructed. “The level of sweet water in the Indus River began to go down and salty seawater began to rise. The once fertile lands turned barren,” he said.

He added that things aren’t better off on the other side of the bank – the residents of the taluka on the opposite side can’t produce enough food to sustain themselves, said Allah Din. He added that because seawater has moved inland and freshwater is scarce, villagers have been eyeing urban centres and packing their bags.

Another resident, Muhammad Ayub, who is a schoolteacher, claimed that corruption and political jousts have worsened the situation. He said villagers oppose the government’s plan to build Zulfikarabad because they feel they will become strangers in their own lands. “The government may create problem for us. They want us to migrate, but we will fight till our last breath against the development of Zulfikarabad.”

A famer-turned-fisherman, Muhammad Usman Baloch, said, “Over the last few years, I sowed seeds in over 200 acres. But now my hands are empty. Only 15 acres is still fertile while the rest has become plagued by the problem of water-logging and salinity.” He said that he had made the switch from a farmer to a fishermen along with a lot of other people simply because climate change had dramatically altered the landscape.

World Wildlife Fund- Pakistan (WWF-P) recently organised a trip to the area where journalists got to explore the impact of climate change on people in these communities. A media manager for WWF-P, Tahir Abbasi, said that 0.27 million hectares had become infertile. “The immediate issue of the villagers is a lack of sweet water. This reflects disturbances in the ecosystem and climate change.” He said the problem began during the 1970s when the freshwater flow of the Indus River started to shrink from 150 million acre-feet (MAF) to less than 2 MAF because of which the sea moved inland and rendered the land infertile. In Thatta city, the groundwater is not fit for consumption and water-logging and salinity has destroyed vast tracts of land.

He added that WWF-P intends to reduce the risk climate change poses to vulnerable communities in Pakistan’s coastal regions. Abbasi said he is aware that the effects of climate change spill across boundaries.