Those who emulat­e can never compet­e with those who create.
By Salima Feerasta
Published: May 24, 2013
Tweet Email 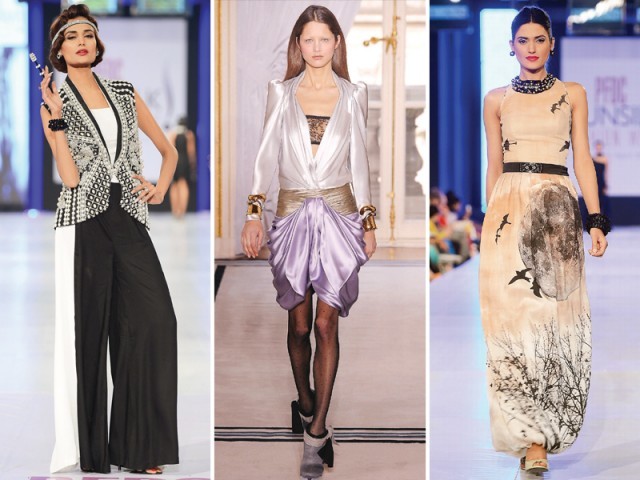 Are Pakistani designers compensating for a lack of originality by appropriating other people’s designs? PHOTO: FILE

He’s done it again. Copycat-spotting blogger Aamir Bukhari has come up with a new set of inspirations and imitations by Pakistani designers, but this time, it’s from the runway. His blog aamiriat.wordpress.com has now put top designers Karma and Elan in the firing line, amongst others.

Aamir certainly has an eye for spotting similarities. He broke the story of one of SanaSafinaz’s 2013 lawn designs being inspired by a pair of Zara pants. He also reported SanaSafinaz’s use of a Pucci print, Gul Ahmed’s homage to vintage YSL and many more. It’s a talent to be able to spot close copies from amongst the hundreds of fashion images out there, and Aamir is particularly good at it.

His latest blog entry is startling. For example, it seems some of Karma’s smash-hit Gatsby collection shows staggering similarities to Balmain’s fall 2012 collection.

Aamna Aqeel seems to have been similarly inspired by Balmain for some shorts in her SS2013 collection. Ali Xeeshan and Tabassum Mughal also make his “Hall of Shame” but their crimes seem to be more about copying styling rather than actual design similarities.

Xeeshan uses an umbrella in the same way as Reema Acra while Mughal’s crowns are just like the ones used by Dolce & Gabbana.

Batur’s Givenchy-inspired outfit is more along the lines of Karma’s outfit — too close of a copy for comfort. While not all of Aamir’s picks are in the same league in terms of “inspiration”, there is a clear pattern. There’s also a rumour that another top designer’s showstopper at PFDC Sunsilk Fashion Week was heavily inspired by Balenciaga but with no pictorial evidence available, it seems unfair to name names.

So, are some Pakistani designers crossing the line? Are they compensating for a lack of originality by appropriating other people’s designs? Well, some Pakistani designers may be “inspired” by other designers, but this isn’t a Pakistani problem. It happens all over the world and blogs like Aamiriat have made it easier for such cases to come to light. For example, the Tumblr blog called “Balenciaga did it first” is devoted to highlighting instances where other designers do looks that Balenciaga has previously done.

Elan is called to book for using a painting of Mount Fuji that is ascribed to both Joel Edwards and “Trinifellah”. It’s not clear from the blog that Elan has merely used a picture and not plagiarised an outfit. This, I think is unfair as the implication of copying an outfit is a far graver accusation. In fact, a quick Google search reveals this painting is being used on many sites, often without any picture credit.

“I never made any secret of the fact that I used images from a variety of sources for my prints. In fact, I printed every picture I used in my press release,” says Khadijah Shah of Elan. “Many of these were ancient pictures and with pictures like this one that were posted in many locations, there was little way to authenticate ownership of the image.” She went on to reveal that whenever she used images of known artists, such as Saeed Akhtar for her first collection, she was always careful to get prior permission. With oriental images of dubious ownership plucked off the net, she neither felt this was possible nor necessary.

Call it inspiration or imitation, designers copy each other all the time — that’s how trends are born. A dozen different designers don’t spontaneously come up with the same idea — it’s an organic process. Sometimes trends are inspired by pop culture, hit TV shows, films and the like. More often, one person makes something truly original, unusual or aesthetically pleasing and others are inspired to do their own versions. These variations gradually filter down to the high street (or darzis, in the case of Pakistan) and suddenly everyone is wearing jumpsuits or chooridars or whatever.

Blatant exact copying is a separate yet genuine problem, with entire websites and production houses devoted to churning out replicas. That is an issue that needs to be dealt with severely as replica merchants are genuinely stealing intellectual property.

Although a couple of the designs highlighted by Aamir, particularly the Balmain-inspired ones, did sail very close to the wind, none are truly replicas. Is it right for designers to be getting critical acclaim for something that is not truly and entirely theirs? Probably not. But genuine originality is rare and as long as people put their own twist on an idea they copy, fashion has no problem with the concept. However, it’s important to point out that those who merely emulate can never hope to compete with those who really create. A unique signature is crucial and designers would do well to remember this.

Oxford-grad Salima Feerasta is a social commentator and lover of style in any form or fashion. She blogs at karachista.blogspot.com and tweets @karachista