Sun salutes in the sands of Thar

Sun salutes in the sands of Thar 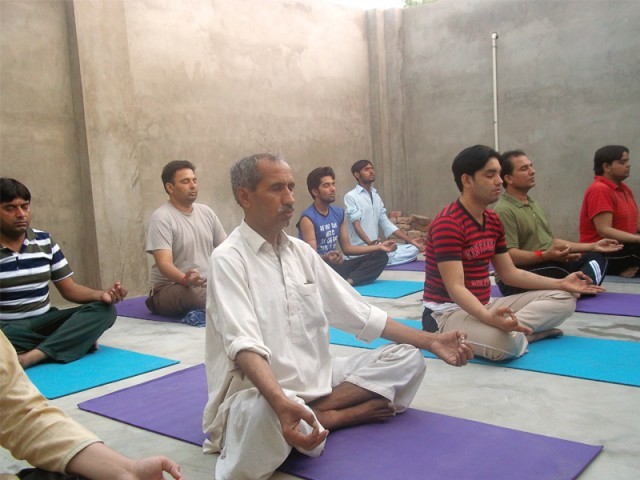 Yogi Kumar opens a centre for yoga in Mithi after his wife died of blood cancer. PHOTO SAJID BAJEER

Bundled between tiny tea-stalls and vegetable vendors on the main commercial strip of Mithi, the capital of Tharparkar district, the Prem yoga centre stands out as a complete anomaly in the city’s landscape. The huge signboard at the entrance immediately grabs your attention and coaxes you to come inside. A sizeable open-air ground, often used for political jalsas and weddings leads up to the yoga room where the actual sessions take place. Huge posters showing the teacher and founder Santosh Kumar suspended in various yoga positions like the crow pose, the warrior pose and half-lotus, adorn the walls.

“The same Supreme Being that breathed life into you also breathed life into me. An inextricable force binds us. So where does that leave time to hate? We are here to love,” says a solemn Kumar, popularly known as Yogi Kumar as he explains the premise behind his latest labour of love — the Prem Yoga Centre.

As the name suggests, Kumar aims to help his clients maintain a balance between mind, body and soul with the help of yoga. His broader vision is to create harmony in society by helping individuals reconcile with their spiritual and physical beings.

“People around us are stressed, despite having everything,” he says. “Yoga helps you achieve that internal change, and ultimately inner peace.”

For Kumar, the centre holds a personal, an almost spiritual meaning. Having lost his wife to blood cancer, he treasures the importance of health over everything else.

Yogi Kumar opens a centre for yoga in Mithi after his wife died of blood cancer. PHOTO: AMEER HAMZA

“The doctors said that my wife wouldn’t make it beyond one month. I used to make her do a little bit of yoga every day, and she survived for 14 months. It was a miracle,” he says.

Soon after, he handed over his business to his brothers and devoted his entire attention towards the centre and helping others. He claims that most conditions such as obesity, stress, thyroid malfunction, and eyesight loss are all aggravated by a neglect of the self.

Kumar has no formal training in the subject but has learnt everything over the internet, using video guides and manuals. He has also attended a few formal training sessions in Dubai and Malaysia.

Despite the lack of proper certification, his clients have complete faith in his expertise.

Forty-three-year-old Jai Prakash, an employee with an NGO, comes to the sessions regularly after work. He says that even before the yoga centre opened, Kumar was always the person everyone used to go for health advice. “He has always been inclined towards health and fitness. You talk to him for ten minutes and you will realise that he knows what he is talking about,” says Prakash.

The centre has been open for less than a month, but over fifty people are already attending. While the majority of them are men, six women are also training. Kumar admits that the response has been phenomenal, proof that there is a market for health and fitness in a place like Tharparkar as well.

“There is a strong tradition of yoga in Hindu philosophy, so there has always been a certain degree of awareness about it in Tharparkar,” says Dr Ramesh Kumar, a resident. “But this is the first time it is being done commercially on this scale here.”

Five one-hour sessions are offered at various times of the day for a nominal charge of Rs1,000 a month. Along with the sessions, Kumar also helps his clients with their diet.

Thirty-six-year-old Mashooq Omrani, a sports teacher by day, has been a regular at the centre since the beginning. He claims that he has lost six kilogrammes in the past two weeks and feels energised from the workout. “Before coming here, I was rapidly gaining weight and I hated it,” he says. “Now I feel much lighter physically and psychologically.”

For 17-year-old student Rakesh, the yoga class is a welcome break from his strenuous academic routine and helps him stay and feel fit.

While Kumar is the sole trainer right now, he plans to expand by training more men and women so that they can open centres in cities like Karachi and Hyderabad. “I am not doing this for money,” he stresses. “I want to take it to schools, NGOs and even the police… Yoga is for everyone.”