Sherpao says TTP must be negotiated with

Sherpao says TTP must be negotiated with 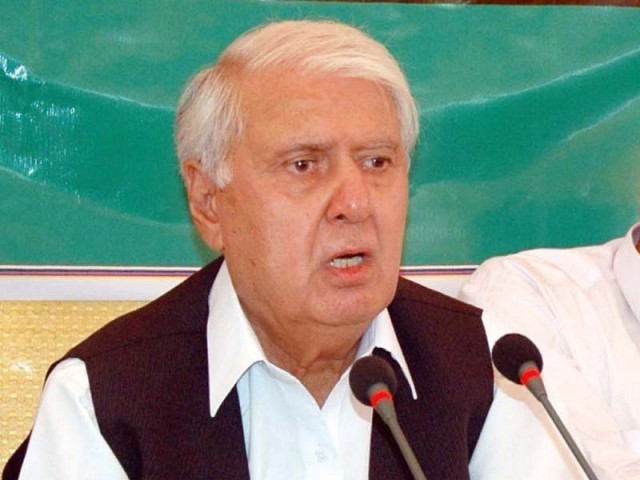 Although he has himself survived three suicide attacks – one while he was campaigning in the 2008 elections – Aftab Ahmed Khan Sherpao believes the only way to restore peace is to negotiate with the Tehreek-e-Taliban. In an exclusive interview with The Express Tribune, the leader of the Qaumi Watam Party blames the ANP and PPP for having missed several opportunities to do so, saying they should have reached out to the Taliban in the larger interest of Khyber-Pakhtunkhwa and its people.

“The TTP had suspended its activities in Pakistan for a considerable time after the 2008 elections,” said the former K-P chief minister. “Perhaps they were waiting for a peace proposal from the new coalition government,” he said, adding that the ANP did not avail that chance and instead ‘provoked’ the Taliban.

But how fair is it for him to lay the blame at the doorsteps of the parties who have themselves been the biggest targets of the terrorists. “In real terms, the ANP took no practical steps for the restoration of peace in KPK. Now they are raising a hue and cry and asking other politicians to help in talks with the TTP,” Sherpao said while adding that the ANP is exploiting the current attacks to hide its own mistakes.

As for his own campaign, he admits that he has to be very careful in light of the threat of terrorist attacks. “While we have addressed late-night election rallies in Swat, election activities in Charsadda, Mardan , Nowshehra and Swabi are rare due to the danger of violence.”

Once again pushing for peace talks, Sherpao said he would join hands with any party for the cause.

“We can join JUI-F or any other party to open peace talks with the TTP,” he said, adding that, “the United States is using the good offices of Pakistan for a peaceful end to the war in Afghanistan and we are not taking any step to bring peace back to our own country.”

He suggested that talks with TTP should be initiated soon after the May elections. “The next government should primarily concentrate on the restoration of peace and stability in the country as its top priority,” he said.

He also added that no one party would be able to dominate K-P in these elections, and that a coalition government would be formed. “JUI-F may emerge as a major party in K-P,” he predicted. With Sherpao’s QWP having allied with the JUI-F in Swabi and Buner, he is clearly looking forward to joining them in the next K-P government as well. However, he completely writes off the ANP and PPP’s chances. “They have miserably failed to deliver in the past five years,” he said dismissively.

About the PML-N he predicted that it will face a tough time at the hands of the PTI in the Hazara division, a place that had been a strong hold of the PML-N in the past .