Poor perfor­mance and intern­al rifts may hurt the PPP in its greate­st strong­hold.
By Sarfaraz Memon
Published: May 7, 2013
Tweet Email 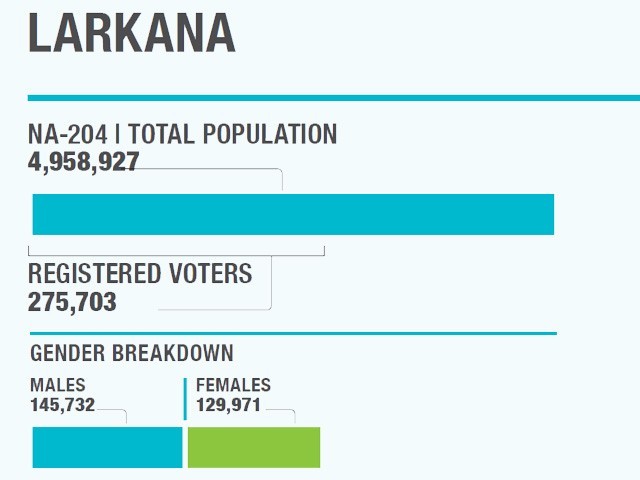 The political history of Larkana is the political history of the Pakistan Peoples Party. PPP founder Zulfikar Ali Bhutto contested and won during the 1970 and 1977 elections. In 1998, the NA seats were won by three ladies belonging to the PPP — Begum Nusrat Bhutto, Benazir Bhutto and Begum Ashraf Abbasi. The two Bhutto women continued to win NA seats in 1990, 1993 and 1997.

But now, fortress Larkana is showing cracks. The party’s disappointing tenure has left many disillusioned, and with disgruntled leaders  – particularly those belonging to the Abbasi family – now contesting as independents, the party’s hold is threatened.

With some of its winning candidates tainted by association with the party’s poor performance, PPP has opted for new faces.

This move has engendered strong opposition, especially from the prominent Abbasi family, members of which are contesting as independents.

This anger is evident in NA-204, where Moazam Abbasi is contesting as an independent after being denied a party ticket. The previous winner, Shahid Hussain Bhutto, was also overlooked by the party. Instead, the PPP has chosen Ayaz Soomro, a move that may significantly divide the party’s vote bank, especially since Ghinwa Bhutto of Pakistan Peoples Party-Shaheed Bhutto (PPP-SB) is also contesting the same seat.

The PML-F candidate Mehtab Akbar Rashidi also enjoys significant support, with analysts saying the real competition for this seat is between Rashidi and Abbasi.

The story is similar in NA-205. An angry Dr Safdar Abbasi is contesting independently this time, and will face the PPP’s Nazeer Bughio in what is likely to be a tough fight.

Things seem comparatively less complicated in NA-206, which hosts two strong contenders – PPP’s Nawabzada Amir Magsi, who won in 2008, and PML-F’s Asghar Shah. According to analysts, the real contest is between these two, despite the multiple hats in the ring.

NA-207 is an important seat, and will see a battle between the PPP’s Faryal Talpur and Ghinwa Bhutto. Bhutto supporters will have a tough time deciding who best carries forth the PPP spirit as embodied by ZA Bhutto and Benazir, both of whom are sorely missed in the area.

Damage control: Too little, too late?

Party Chairman Bilawal Bhutto Zardari has taken notice of the grievances of the Abbasis and has directed the leadership to try and convince the family to withdraw their candidatures, but thus far the Abbasis have refused to enter negotiations.

What’s possibly even more dangerous for the PPP, is that the Bhutto clan is also not satisfied with the party leadership.

Sardar Aamir Bhutto, while addressing a press conference, said that he and his clan will now support Ghinwa, who is contesting against Faryal.

The people of Larkana are hurt and disappointed with the PPPP candidates. They are now seemingly in line with the Abbasis, who they believe are the true jiyalas adhering to the vision of the PPP. Whether this sentiment will prevail or the aura of the PPP will draw them back into the fold, is another matter entirely.

Women’s issues: Who will be fair to the fairer sex?