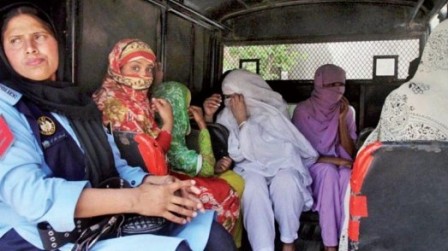 Women arrested during a raid at a guest house in Sector F-11 on Friday night on charges of ‘immoral activity.’ (Online)

ISLAMABAD: The police raided an alleged brothel in Sector F-11/2 and arrested 15 people, including seven women.

The raid was conducted following a tip-off from a police informer. The investigation officer, Javed Khan, told The Express Tribune on Saturday that residents of the neighbourhood had already lodged complaints with the police.

But they wanted to capture the accused red-handed, he added.

Therefore, the informers were given the special task of reconnaissance of the house. The alleged brothel was located in House 126 in Street 19 of the sector.

Eight men were also rounded up, including those accused of being pimps and customers, many of whom were found drunk. Thirteen bottles of liquor were recovered. Upon further investigation, the police found out that three women belonged to Lahore and one each from Attock, Khanewal, Bahawalpur and Gujranwala.

When interrogated, the women accepted that they were sex workers, who reportedly, informed the police about their relationships with the arrested men.

The women were allegedly brought by them from their respective cities for prostitution.

Four of the men confessed that they used to bring sex workers to Islamabad on a regular basis, Javed Khan told The Express Tribune. The alleged brothel was being run by one Chaudhry Sarwar, in the garb of a guest house.

The police claim that Sarwar managed to escape from the house minutes before the raid. It is suspected that he came to know about the raid in advance. However, efforts were being made to arrest him, Khan said.

The arrested men and women were presented in court on Saturday and then sent to jail on judicial remand.