PTI chairm­an says if his politi­cs is differ­ent, he can't stand behind a bullet-proof screen and connec­t with people.
By AFP
Published: April 30, 2013
Tweet Email 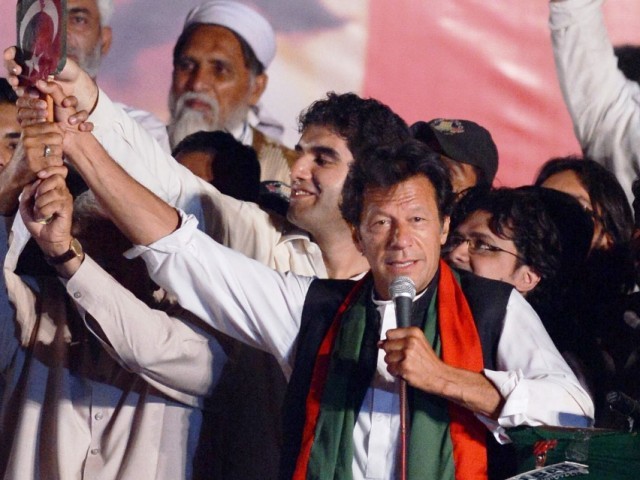 SARGODHA: You can’t lead a revolution and hide behind bullet-proof glass – at least not according to Imran Khan, wildcard contender for power at the ballot box in Pakistan next week.

Visibly tired by 15-hour days, frenetic flying and driving round the country to address tens of thousands in a campaign dominated by threats and fear of attack, the Pakistan Tehreek-e-Insaf chairman and cricket legend is nothing if not focused.

“This is a revolution taking place,” he told AFP after a couple of days of hard campaigning in Punjab.

“When I came to politics 17 years ago, I had already conquered my fear of dying because I knew I was going to challenge the status quo,” the 60-year-old said. But security is clearly a major preoccupation.

Imran says he’s on the “top five hit list”. He may not use the bulletproof glass screens used by other politicians at public rallies, but he travels in an armoured car with an armed police escort.

A rally in Karachi was cancelled on Sunday after attacks on rival parties killed more than 20 people. Attacks targeting the election campaign have so far killed nearly 60 people ahead of the May 11 polls.

“We couldn’t take a risk. It’s just too dangerous. I mean you can’t risk the life of other people,” the 60-year-old said.

“My older son worries. You know he worries, obviously, because when he hears what’s going on in Pakistan,” he says.

The three main parties in the outgoing government, the Pakistan Peoples Party (PPP), the Muttahida Qaumi Movement (MQM) and the Awami National Party (ANP), have curtailed public gatherings in the face of direct Taliban threats.

Imran’s campaign is about mobilising the masses, exploiting disaffection with a corrupt elite, tapping into anti-American sentiment that blames many of the countries woes on the United States and promising to fix a crippling power crisis.

“If my politics is different… I can’t be standing behind a bullet-proof screen and connecting with the people,” he said.

When he bounded up to the microphone in Sarghoda, he deliberately stepped in front, not behind the protective screen party workers had hauled onto the podium.

Scathing about Sharif and President Asif Ali Zardari, he does, however, have words of pity for former military ruler Pervez Musharraf, who returned home last month from self-imposed exile only to be put under house arrest.

“He sent me a message once saying if he and I got together, then 95 percent of Pakistan was with us. I mean that would have been a suicide attack on my party,” he said.

“Anyway, it’s something I have always had for underdogs, I feel sorry for him, although he did a lot of damage to Pakistan.”