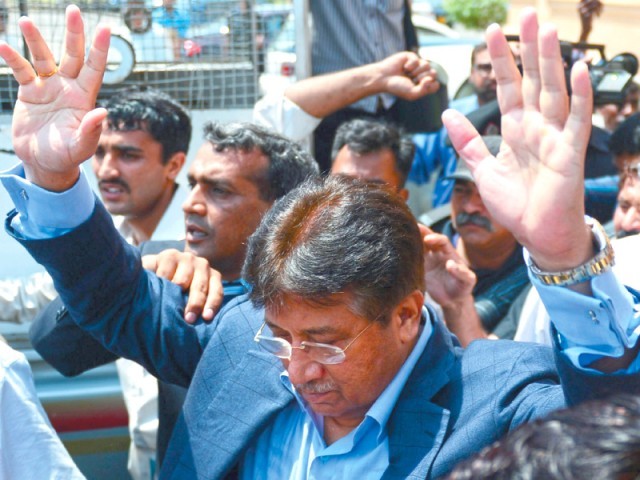 During the proceedings, FIA lawyer Chaudhry Zulfiqar Ali asked ATC-I Special Judge Chaudhry Habibur Rahman for Musharraf’s physical remand so that he could be questioned in regard to former premier Benazir Bhutto’s assassination.

Musharraf’s lawyer Barrister Salman Safdar requested the court to award the former president judicial remand. The FIA prosecutor objected to this, saying that Musharraf has been declared a proclaimed offender and should be physically remanded.

Safdar also demanded the court change the head of the joint investigation team, Khalid Qureshi. He alleged that Qureshi was not an impartial investigator because he once briefed the Sindh Assembly in the Benazir Bhutto murder case despite not being authorised to do so. The court, however, rejected Safdar’s request.

After hearing both sides, the ATC awarded a four-day physical remand to the FIA and asked the agency to produce the former president before the court.

Later, while talking to the media, the FIA lawyer said that the agency was interrogating Musharraf on the basis of documentary proof, Mark Seagle’s statement and other available evidence.

“If security could be provided to former premier Shaukat Aziz and Chaudhry Shujaat Hussain then why not to Benazir Bhutto? This shows Musharraf’s involvement [in the assassination case],” Ali said.

However, he added that given security threats, the former president will be interrogated at his Chak Shehzad residence, which has been declared a sub-jail.

Musharraf was formally arrested by the FIA on Thursday after the court directed investigators to include him in the probe into the 2007 assassination.

Musharraf was driven in a motorcade from his residence to the ATC where over 500 Rangers personnel and hundreds of policemen were deployed.

Lawyers were peaceful and remained calm and none of them chanted slogans against the former dictator throughout the process.

“We did this to give a soft image of the legal community to the people. Some elements are denting the image of lawyers, which is unjust,” the District Bar Association president said. However, the police barred junior lawyers from entering the court premises.