Recent blasts repres­ent a true threat to what we had all hoped would be a free, fair and peacef­ul electo­ral proces­s.
By Editorial
Published: April 25, 2013
Tweet Email 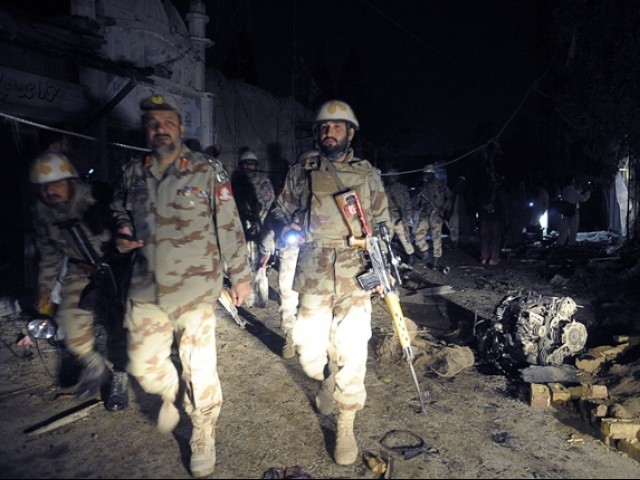 Elections should not involve blood. This is obvious. But the degree of violence we are seeing raises all kinds of fears and all kinds of uncertainties. We have, over the past two days, had a spate of bombings.

In Quetta, at least two persons were killed, and dozens injured on April 23 as four blasts took place across the city. Some reports suggest one may have been a suicide attack, killing a member of the Frontier Constabulary force. On the same day, an explosion occurred in Karachi at the busy Peoples’ Chowrangi area when a device planted in flower pots under an MQM election poster went off, killing three and injuring some 30 others. The incident has resulted in a strike in that volatile city with schools and many markets closed. The violence continued into April 24 with another two blasts in Quetta — coming to a horrific total of up to six blasts within 24 hours — injuring some 13 persons. Khyber-Pakhtunkhwa has, of course, not been spared by the violence targeting the ANP, and on this day too, there were several blasts in different areas of the province, including Peshawar, Dera Ismail Khan and Swat, which left around eight people injured, including a seven-month old child.

Who knows what the toll in terms of death and injury will be by the time we get to the May 11 polls. Right now, it seems to be rising by the day. We do not know what the precise impact of all these incidents will be, but the overall result is a rising sense of disquiet everywhere in the country. The run-up to the polls has been disturbing and the prospect of more danger ahead is not a welcome one. The polls are becoming a security nightmare with no solution to the problem in sight. It is, after all, impossible to patrol every street or watch every corner constantly.

The situation is also affecting the electoral process itself. Fear lurks in Quetta with limited electoral activity taking place. The multiple blasts certainly do not augur well. They could have a direct impact on the polls by pushing down turnout, and as such, they represent a true threat to what we had all hoped would be a free, fair and peaceful electoral process. This now seems less likely than before.