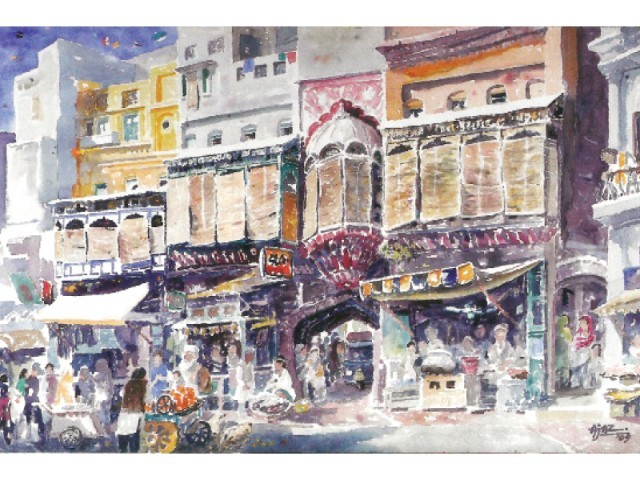 Lahore Reincarnated, an art exhibition, by Dr Ajaz Anwar opened at the Colour Art Gallery in Gulberg on Saturday.

The exhibit is at once a tribute to his teacher Ana Molka Ahmed, the founder of what is now the Punjab University College of Art and Design and “a call to preserve the essence of historic architecture of the city,” Dr Anwar says.

“Lahore is dying. The entire city is on the death bed. This is an appeal to save the city,” says Dr Anwar, who is also a conservationist, an environmentalist and a member of the Dilkash Lahore steering committee. Dr Anwar began painting in the late 1950’s. He received the president’s Pride of Performance award in 1997. He has also been the curator of the Zahoorul Akhlaq Gallery at the NCA till six years ago.

“These paintings have a similar theme: the historical buildings in the Walled City. I have experimented with the composition and the angles,” says the artist.

The painting, Gathering of the Storm, shows Bradlaugh Hall behind the University of Veterinary and Animal Sciences. The hall had housed the arts council. It was built with large windows and doors for ventilation. It was constructed in 1900, just before the arrival of electricity in Lahore, explains Dr Anwar. “The now dilapidated hall could collapse any moment,” he says, adding, “The painting is an appeal to the authorities to save it.”

Kucha Pir Shirazi II, another painting, is reminiscent of the ancient structures inside Shah Almi Gate. Muran Han II shows an English haveli, opposite Monnoo House on Montgomery Road that was demolished 15 years ago.

“The building exists only in my paintings and in my mind. I have painted it from three different angles previously,” says Dr Anwar, who repainted it in 2012.

The painting, Railway Road III, commemorates the demolished architectural facets of the road connecting the Walled City to the City Railway Station.

A 28 by 42 inch painting titled The 40 Thieves shows several historic buildings being torn down at the Urdu Bazaar. The ‘thieves’ in the painting are the donkeys transporting the rubble from the buildings, says Dr Anwar.

“Lahore and brightness of colours and light complement one another,” he said.

“I am displaying these paintings for my friends and fans and anyone interested in having a look at them,” Dr Anwar says. Most of the visitors at the opening were students and faculty of the National College of Arts where Dr Anwar taught till 2000, and some senior artists.

“The paintings are not for sale. It’s more like a travelling exhibition,” says Dr Anwar. Some pieces have been displayed at the House of Nanna- a trust established by Dr Anwar in 2010.

“Looking at Dr Anwar’s work is always an experience to relish. His facility with working large scale water colours is evident. It seems as if the city is waiting to be picked up for his subject matter,” said Asad Hayee, a former student of Dr Anwar at the NCA.

The paintings will remain on display until April 30.

Public health: ‘Nobody should lose their child to preventable disease’