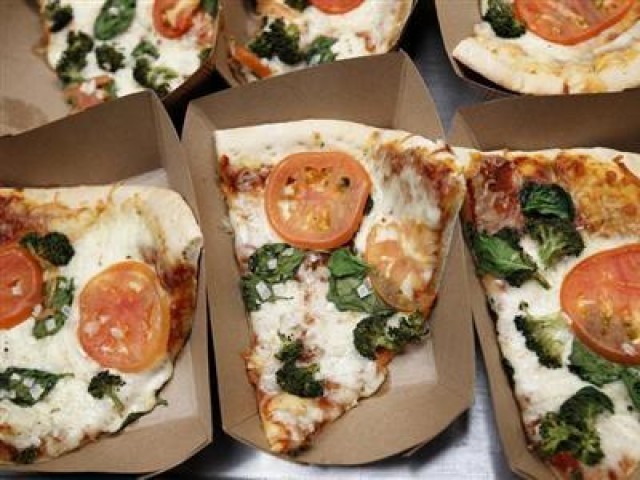 Pizza is shown for sale in the cafeteria at a middle school in San Diego, California March 7, 2011. PHOTO: REUTERS

NEW YORK: Shrinking the size of kids’ plates and bowls and encouraging them to eat more frequently throughout the day might help them eat less and keep off extra weight, new research suggests.

In one study, researchers found first graders served themselves smaller portions when using miniaturised dishware – and ate less food when they had less on their plate.

Another review of past research found kids and teens who ate most often during the day were 22 percent less likely to be overweight than those who ate the fewest meals and snacks.

Jennifer Fisher, who worked on the dish-size study, said it was preliminary but could still inform parent choices.

“For now, certainly it seems like something parents can easily incorporate into their daily lives without a lot of work and effort,” Fisher, from Temple University in Philadelphia, told Reuters Health.

She and her colleagues studied 42 elementary school kids who were given the chance to serve themselves lunch. On four days the kids used child-sized plates and bowls; on another four they used adult-sized dishware, which was twice as large.

First graders served themselves an average of 300 to 500 calories worth of the lunch entrée – pasta or chicken nuggets – each day.

When they used adult dishware, the kids took an average of 90 more calories of food, the researchers found. And kids who ended up with more food on their plates also tended to eat more, Fisher’s team wrote Monday in Pediatrics.

“It doesn’t appear that simply because you might have large dishware at home, your child is going to overeat,” said Fisher – because it depends on who’s doing the serving and how much is served.

But, she added, “If more food appears on the plate, they’re going to eat more.”

“The results are very interesting and confirm our expectations that the impact of plate size on adults in the laboratory also apply to children,” Dr. Thomas Robinson, a childhood obesity researcher at Stanford University in California, told Reuters Health in an email.

For their own analysis, researchers from Harokopio University in Athens, Greece, looked at 11 studies, mostly conducted in the Mediterranean, that compared eating frequency and weight in close to 19,000 kids and teens.

The overall pattern showed that youth who ate most often – typically at least four or five times per day – were least likely to be overweight or obese. However when they looked closer, the researchers found that link only held up in boys.

Robinson, who was not involved in the new research, said it’s hard to tell which came first in those studies: eating frequency or extra weight.

The results “do not look very convincing one way or another,” he said. “It is also hard to come up with a convincing reason why boys and girls would be different.”

The researchers said their findings don’t prove that a given child will lose weight by eating more often. But schools, for example, may be able to make a difference by integrating smaller, more frequent meals into the day.

“Instead of providing three big meals per day, it would be better (for parents) to have their children eating smaller meals and more snacks throughout the day,” co-author Mary Yannakoulia told Reuters Health in an email.

However, she added, parents still need to pay attention to the quality of those snacks.

According to the Centers for Disease Control and Prevention, 17 percent of kids and teens in the U.S. are obese – a proportion that has almost tripled since 1980.

“We know that it’s so complex that there’s absolutely not one cause or solution,” Fisher said.

A third study also published this week in Pediatrics found teens who spent more time focused on the TV were heavier than their peers. However, time spent playing video games or on the computer was not tied to weight.