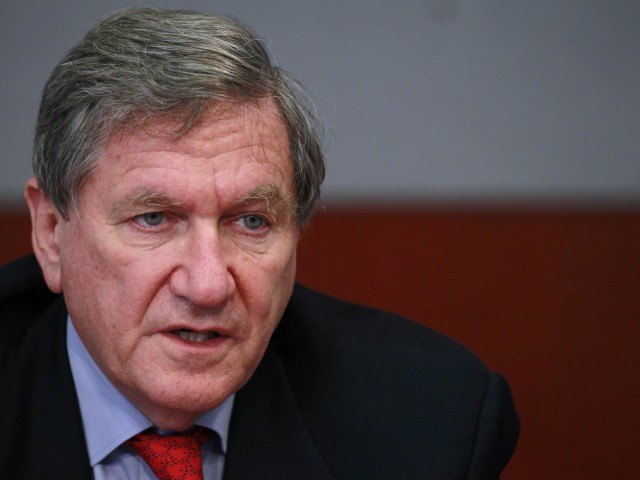 Ambassador Richard Holbrooke said there was no evidence yet that Islamabad was acting on Washington's demands that it move against the Haqqani group. PHOTO: REUTERS

NEW YORK: Pakistan’s fight against militants has been constrained by the need to deploy troops to help victims of the recent devastating floods, the senior US official for Pakistan and Afghanistan said on Tuesday.

Ambassador Richard Holbrooke said there was no evidence yet that Islamabad was acting on Washington’s demands that it move against the Haqqani group, a Taliban ally which US officials suspect has ties to Pakistani intelligence, and suggested this was because of the country’s devastating floods.

“They have tens of thousands of troops on flood duty. The army has really been the major factor in the rescue effort, and you can’t do both things at once,” said Holbrooke, who spoke in New York as part of a Reuters Washington Summit. He dismissed suggestions, however, that the Pakistani government’s halting response to the flood disaster was creating instability in the country.

But Holbrooke, who recently returned from a trip to Pakistan, warned again that the country must find ways to raise some of the tens of billions of dollars it will need to rebuild.

Triggered by heavy monsoon rains in late July, the floods killed more than 1,750 people, forced at least 10 million people from their homes. and caused up to $43 billion in damage.

“The international community is not going to be able to pick up the bill for $20-$30 billion or more. We will pick up some of it, … but the Pakistanis must raise their own revenue base,” Holbrooke said. Pakistan has one of the world’s lowest ratios of taxes to gross domestic product, at about 10 per cent, and Holbrooke said it was important for Islamabad to address the disparity in order to head off potential complaints from donor nations.

“Their tax rates on the wealthy are much lower than those in the West,” Holbrooke said. “They have to come to terms with this.”

The United States and Europe should consider it a “strategic imperative” to offer Pakistani products enhanced access to their markets, he told the Council on Foreign Relations think tank. Pakistan is deeply embroiled in its own battle against insurgents while serving as an ally in the US-led war against militants in neighbouring Afghanistan.

While Pakistan remains focused on its flood efforts, Holbrooke played down any risks of instability. “The country is full of rumors. … You’re all aware of them. But as far as we’re concerned, our focus is solely on how we can help the people,” said Holbrooke, one of the most colorful US diplomats, who is handling perhaps the toughest diplomatic challenge faced by the Obama administration.

Pakistan’s economy was already fragile and the cost of rehabilitation will likely push the 2010-2011 fiscal deficit to between 6 and 7 per cent of gross domestic product against an original target of 4 per cent. Holbrooke said the United States has taken the lead in providing emergency aid, committing $340 million to $350 million on its own and making a total contribution of close to $1 billion if the US-funded activities of international groups such as Unicef and the World Food Program are included.

Holbrooke conceded the floods meant more government troops were being diverted to relief work from battling the local Taliban and other militant groups such as the Haqqani network, which is believed to be closely linked to al Qaeda and the architect of several high-profile attacks in Afghanistan.

The United States in particular has asked for pressure to be put on the Haqqani group, but has run into resistance in part because some in Pakistan feel the Haqqanis may be a valuable asset in Afghanistan if US troops leave, as Islamabad anticipates, before the country is stabilised.

But Holbrooke said the United States — which has staged repeated aerial drone strikes against suspected militant targets in the border region between Afghanistan and Pakistan — would “go after them with every means available.”

“This is a ferocious thing that is going on, and by ferocious I mean the military campaign,” Holbrooke said, referring to the US fight against militants in eastern Afghanistan near the border with Pakistan. “The Pakistani army has diverted a very large number of troops to the relief efforts. But the American activities in Afghanistan and our other activities against those people who threaten us have not diminished.”