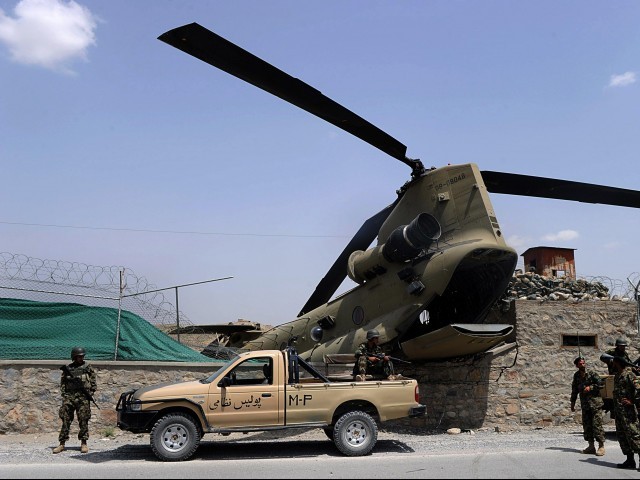 KABUL: Nine Nato troops were killed in a helicopter crash in the insurgent heartland of southern Afghanistan on Tuesday, making 2010 the deadliest year for international forces since the war began.

The Taliban, which have been waging an increasingly deadly insurgency against the Afghan government and foreign troops since the 2001 US-led invasion ousted them from power, immediately claimed responsibility.

The Nato-led International Security Assistance Force (Isaf) said the cause of the crash was “under investigation,” adding: “There are no reports of enemy fire in the area.”

The helicopter came down in the Daychopan district of Zabul province in the Taliban stronghold of southern Afghanistan, said provincial spokesman Mohammad Jan Rasoulyar.

“We don’t know the cause of the crash or the number of casualties,” he said.

Another Nato soldier, an Afghan soldier and a US civilian were injured, Isaf said, but it did not identify the nationalities of the dead troops. “We have no more details at the moment because the helicopter recovery operation is underway,” an Isaf spokesman told AFP on condition of anonymity.

The incident brings to 529 the number of foreign troops killed this year, according to an AFP tally based on the count kept by icasualties.org, surpassing the previous record of 521 deaths in 2009.

A total of 2,097 coalition troops have now died since the US-led invasion of 2001 which ousted the Taliban regime and set off a brutal insurgency which has also killed thousands of Afghans. The US Marines and US Army dominate the foreign forces concentrated in hotspots of the southern provinces of Helmand, Kandahar and Zabul.

After only nine months, 2010 has now become the deadliest year of the long war, with the extra deployment of international forces to nearly 150,000 drawing more battlefield engagements, and leading to a spike in casualties.

June was the deadliest month of the war for coalition troops, with 103 fatalities, according to an AFP count based on the independent icasualties.org figures. Ten foreign troops, mostly American, were killed in a series of attacks across the country on June 22, and another 10 Isaf soldiers died in bombings in the south and east on June 7.

Until recently Nato identified American casualties, while leaving coalition partners to identify their own dead separately. That changed earlier this month and US casualties are no longer revealed. The United States and Nato have increased to almost 150,000 the number troops trying to quell the insurgency which has spread across the country with the Taliban now present in almost every one of the 34 provinces. Their influence is strongest in the south and the eastern provinces which border Pakistan, where the Taliban leadership is said to be taking refuge, and from where attacks on Afghan targets are planned and funded.

US President Barack Obama ordered up an extra 30,000 forces in December as part of a renewed counter-insurgency strategy focusing on the south. US Defence Secretary Robert Gates said last week that US strategy appeared to be working and that he was cautiously optimistic at signs of progress.

Obama has issued a deadline of mid-2011 for United States forces to begin drawing down, adding a sense of urgency to such tasks as training of Afghan forces so they can take over responsibility for the country’s security.